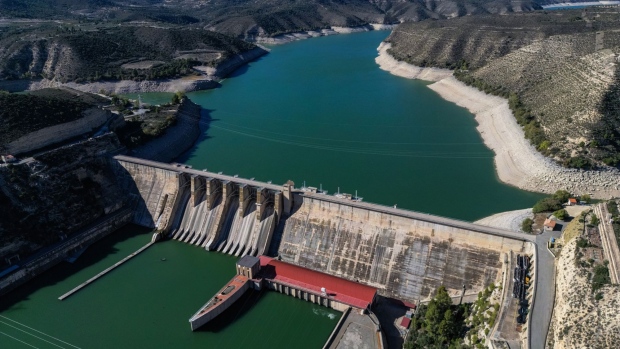 MEQUINENZA, SPAIN - NOVEMBER 05: The Mequinenza Hydroelectric Power Plant on November 5, 2022 in Mequinenza, Spain. Spanish company Endesa will reportedly stop electricity production at the Mequinenza hydroelectric plant, one of the largest in the country, since the reservoir is below 23% of its capacity - the second worst record in the history of this reservoir that was inaugurated in 1966. (Photo by Zowy Voeten/Getty Images) , Photographer: Zowy Voeten/Getty Images Europe

(Bloomberg) -- Spanish utility Endesa SA is set to shut down output at the country’s fifth-largest hydropower plant after drought-like conditions caused reservoir levels to fall below the minimum needed to keep it running.

The Mequinenza facility, located in the north-eastern region of Aragon, will stop operating in mid-November after water levels subsided to below 23% of capacity, the company said in a statement. It’ll be the first time the plant has stopped functioning since it was opened in 1966.

Mild temperatures are delaying the need for heating, prompting a decline in European natural gas prices and giving the continent some respite from an unprecedented energy crisis. In Spain, that weather has resulted in Fall being drier than usual, according to national meteorological agency Aemet.

The capacity to generate power using water stood at 6,221 gigawatt-hours in the week through Nov. 1, or 27% of the total. In October, water reservoirs overall hit the lowest level since 1995, according to Bloomberg calculations based on Environmental Transition Ministry data.

That has led to a steep decline in Spain’s hydropower generation, which plunged 53% in the year through October, according to grid operator Red Electrica Corporacion SA. That drop, along with reduced output from other renewable sources such as wind, has boosted generation using more polluting fuels. Output from gas-fired combined-cycle plants rose by 41% over the same period.

If the drought-like conditions persist, the decision to halt production could extend to plants in the neighboring region of Catalonia, where hydropower output through September was a third lower than the 10-year average, according to Endesa. The Mequinenza plant produced 360 gigawatt-hours though September, about 67% of its average output.

--With assistance from Ainhoa Goyeneche.