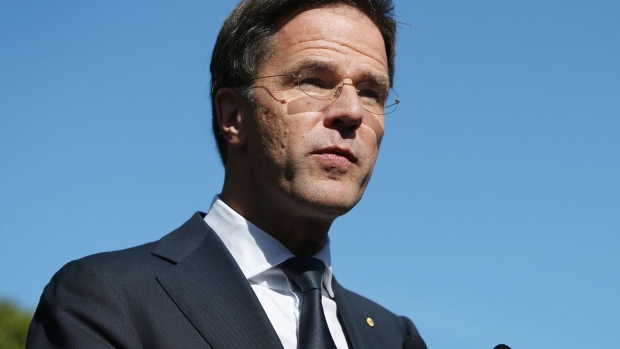 (Bloomberg) -- The main political parties in the Netherlands are discussing a new approach to climate-related investments that would mean they don’t count toward the country’s headline budget deficit.

Prime Minister Mark Rutte and his potential allies are in negotiations to form a new coalition government and the official steering those talks, Johan Remkes, included the proposal in a program submitted to parliament earlier this month. The idea was put forward by Rutte’s People’s Party for consideration by the other groups involved in the process, according to a spokesperson for Remkes.

The proposal would place climate-related investments “outside of the regular budget so that the Economic and Monetary Union deficit isn’t directly affected,” according to the program. The document goes on to say that debt levels should return to the prescribed levels in the “medium term.” An official from Rutte’s party declined to comment on the plans.

A shift toward a looser fiscal regime in the Netherlands would set an important precedent for the rest of the euro-area where member states will this week begin discussions on how to update the budget rules for the whole bloc.

The rules were suspended last year to allow the massive stimulus efforts that kept economies afloat during the pandemic. Finance ministers are now looking at ways to update a framework, known as the Stability and Growth Pact, drawn up more than two decades ago in a world of much higher borrowing costs.

Italian Prime Minister Mario Draghi has said that the SGP is obsolete, and the European Commission, the bloc’s executive arm, is pushing for a full revamp.

The commission is expected to come up with new guidelines in spring as member states prepare budget plans for 2023, when the fiscal rules are due to be reinstated.

Some countries have been pushing for a similar exemption for green investments in the euro-area rules but they have met with opposition from the traditionally hawkish governments in the North of the bloc. The Netherlands is usually an influential member of that group so signs of a more flexible approach in The Hague could mark a potential shift in the broader debate.

In September, the Dutch joined seven other euro members in arguing against a loosening of the budget rules.

“Sound public finances are a central pillar of EU membership,” finance ministers from those countries said in a paper. “Fiscal sustainability combined with reforms which support economic growth must continue.”

After governing with the budget hardliners from the Christian Democrats during his previous term, Rutte’s next administration is likely to see a more prominent role for the pro-European D66, which may support a looser approach to budget policy.

In Germany, Angela Merkel’s Christian Democratic Union is set to be replaced by a center-left-led coalition following September’s election in another shift that could favor a somewhat more flexible approach to budget rules.

“A green golden rule would incentivise the necessary public investments in climate,” according to a paper by the Brussels-based think tank Bruegel. “Without the possibility of deficit funding, the EU will fail to achieve its goal of climate neutrality, and budget consolidation will come at the expense of investment because of political economy constraints.”