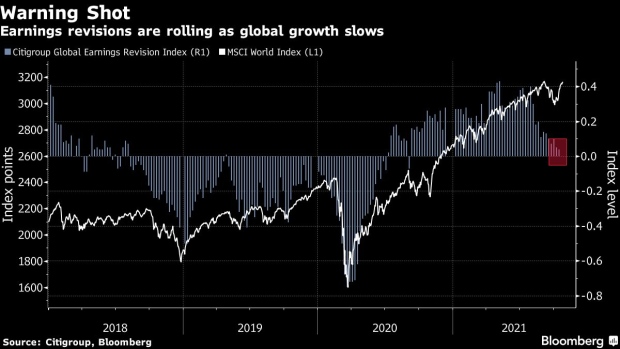 (Bloomberg) -- This earnings season may be as good as it gets, according to Citigroup Inc.

Strategists led by Mert Genc say global earnings per share will rise only 5% in 2022, less than the current consensus for 7% growth and far below the 50% increase anticipated for 2021. Their projection comes after Citi economists downgraded their global growth forecast for next year to 4.2% from 4.4%.

Company analysts may soon shift to “net downgrade mode” for the first time since July 2020, which while “not necessarily fatal for markets” provides reason to be nervous, the strategists wrote in a note. Industries and countries that are most exposed to Chinese growth are the most vulnerable, they said, citing the mining sector, Australia and Germany.

Citi’s caution adds to a series of warnings by strategists that the seemingly unstoppable rally that has pushed U.S. and European stocks to successive records may be running out of steam. Bond yields are rising as central banks hit the brakes on stimulus measures, while the impact of a slowdown in China’s economy is becoming more pronounced.

UBS Global Wealth Management’s Chief Investment Officer Mark Haefele takes a more positive view. He sees a 9% global growth in earnings per share next year and further upside for equities against the backdrop of a continuing robust expansion of the world’s economies.

“We see the current issues as transitory rather than the makings of a new, stagflationary economic regime,” Haefele wrote in a note Tuesday.

Despite their differing outlooks, both Citi and Haefele recommend that investors buy financials -- either because they benefit from higher bond yields or as beneficiaries of economic expansion. And for both, healthcare is their preferred defensive sector, in case things turn sour.