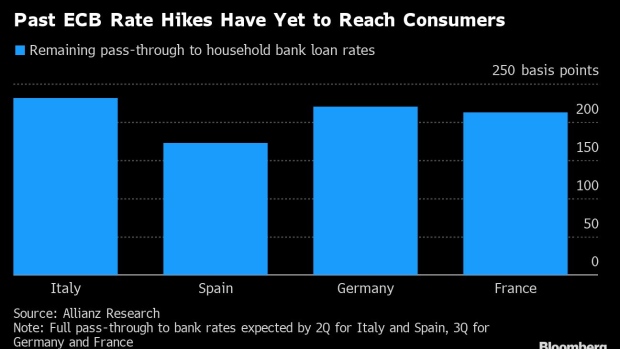 The European Central Bank (ECB) headquarters in Frankfurt, Germany, on Thursday, Sept. 8, 2022. The ECB is on the brink of a jumbo three-quarter-point increase in interest rates to wrest back control over record inflation, even as the risk of a euro-zone recession rises. Photographer: Alex Kraus/Bloomberg , Bloomberg

(Bloomberg) -- The European Central Bank is about to enter a new phase in its fight against inflation, probably heralding more contentious decisions on monetary policy.

Starting this month, interest-rate increases will be accompanied by an extra lever for tightening as balance-sheet unwinding takes shape, all complicated by a likely recession.

With every hike requiring finer judgments about the economic impact and financing conditions, that intellectual tangle will make the relative consensus behind this year’s drastic moves hard to repeat in 2023.

“December will be a tough one, and not knowing when inflation will peak and how quickly it’ll come down, it’s unlikely to get any easier after that,” said Veronika Roharova, an economist at Credit Suisse. “We’re going to see more tension within the ECB as rates approach neutral -- if only because we haven’t had much in the recent past.”

Whatever officials led by President Christine Lagarde do about raising borrowing costs on Dec. 15, their decision will almost certainly bring them to a level roughly deemed to no longer stimulate growth.

That will open a new chapter in the central bank’s policy as future increases to tame inflation move from neutral settings to actually constricting the economy during a slump. Then there’s the question of how high borrowing costs should ultimately rise.

While rates will remain the most important tool, the ECB will also settle the question of how to start unwinding trillions of euros of bond holdings -- so-called quantitative tightening.

The design of that policy may end up reflecting a compromise decision that also encompasses the size of the December rate hike and the pace of future moves. And aside from looking at the Federal Reserve’s experience, there’s little guidance for officials to use as they try to judge the impact of balance-sheet reduction on financial markets.

Adding to the complications will be the clouded economic situation, combined with the uncertainty of when the impact of past rate hikes -- 200 basis points so far -- will finally reach consumers and businesses.

Price pressures are showing faint signs of peaking -- with euro-zone inflation slowing in November for the first time in 18 months.

At 10%, it’s still near a euro-era record, and Lagarde has sought to warn of the danger of false dawns. “Any sense of relief at the ECB will be tempered by the fact that underlying pressures remain way too strong,” Bloomberg Economics’s Maeva Cousin said.

Confidence indicators signaling that the economy may be less fragile than feared are supporting arguments that a looming recession won’t be severe enough to meaningfully tame prices. A strong labor market and fiscal relief measures are supporting spending, leading economists to warn of the danger of prolonged underlying inflation pressures.

That agreement reflects expectations of faster inflation also in the future and was described as a clear second-round effect of above-target price pressures by Bundesbank President Joachim Nagel. It may eventually cover some 3.9 million of the country’s industrial workers, and inspire others.

Policymakers do generally show conviction that the threat of a wage-price spiral in the euro region is contained for now. Even so, neither the ECB nor the European Commission currently predict a return to the 2% target within the next two years.

They will have new forecasts this month showing a first glimpse at 2025. While those projections are unlikely to carry the same weight as in the past due to uncertainty around Russia’s war in Ukraine, the outlook for next year will be useful.

With that in mind, officials including Ignazio Visco have cautioned against “excessively quick and large rate hikes” that could “amplify and slow economic activity.”

He and colleagues such as Francois Villeroy de Galhau and Mario Centeno have signaled a preference for a half-point hike this month. Executive Board member Isabel Schnabel and Governing Council member Bostjan Vasle appear to favor a third consecutive 75 basis-point step.

“There’s reason to strike a more cautious tone in light of the upcoming recession but there’s equal reason to stick with the restrictive stance as inflation expectations remain high,” said Ana Boata, head of economic research at Allianz Trade. “The ECB is facing a complicated, complex situation that’s not easy to navigate.”

A trickier judgment for now is likely to be laying out a strategy for QT, which Lagarde and colleagues have promised to deliver on Dec. 15. Activating it will be a decision for another day.

The few ideas officials have shared about just how such a complex unwinding might work in a multi-nation currency zone hint at a difficult debate ahead.

“It’s probably the most important decision they have to make in December,” said Agnes Belaisch, chief European strategist at Baring Investment Services Limited. “Markets aren’t prepared and they want some guidance. They need to know that -- and more importantly how -- the ECB is finally getting all its instruments aligned.”