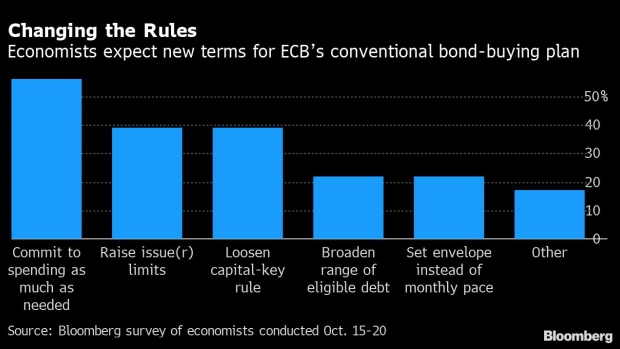 The European Central Bank (ECB) headquarters beside the River Main in Frankfurt, Germany, on Monday, Oct 25, 2021. The European Central Bank insists the current price spike will ease, though officials' most up-to-date view will be revealed at the rate decision, along with their assessment of an economy whose snapback from the pandemic is going awry. Photographer: Alex Kraus/Bloomberg , Bloomberg

The European Central Bank is set to reassure consumers facing surging prices and investors wondering about the consequences that it’s just transitory and not about to spiral out of control.

On the eve of data likely to show an acceleration in inflation that is already the fastest since 2008, President Christine Lagarde will emerge from the Governing Council’s decision on Thursday to explain how underlying pressures remain far too weak for policy makers to pull back stimulus, even if some global counterparts are doing just that.

Compounding that tricky message, the euro region’s economic rebound is hitting a speed bump caused by persistent shortages of parts and raw materials, along with jumping energy costs -- both factors in the consumer-price spike that is squeezing living costs.

Thursday’s meeting is a stepping stone toward December, when officials armed with new economic projections will determine the future of stimulus as the March end-date of their flagship 1.85 trillion-euro ($2.1 trillion) pandemic bond-buying program approaches.

“Energy costs alone could soon exert enough price pressure for headline inflation to exceed the ECB’s target of 2%. The Governing Council is likely to look through the rise -- underlying price increases remain muted and the labor market still has considerable slack.”

Inflation data for October due on Friday is forecast by economists to show another jump to 3.7%. In Germany, whose own report will be released just before Lagarde speaks, the median prediction is for 4.5%, though economists at Bank of America, JPMorgan and Berenberg reckon it might be an eyewatering 4.7%.

Against that backdrop, Lagarde will share the ECB’s prevailing judgment that as uncomfortable as the price surge may seem, it will fade.

They include Bundesbank President Jens Weidmann, who resigned last week and will leave on Dec. 31. He wrote to staff that “it will be crucial not to look one-sidedly at deflationary risks, but not to lose sight of prospective inflationary dangers either.”

Officials on either side of the debate frequently point to wage negotiations as a key factor to watch, with the danger that higher pay demands could entrench price increases. So far, there’s little evidence of that happening.

At a time when surging global inflation has prompted several central banks to dial down stimulus or even raise interest rates, investors are wondering if the ECB could follow suit.

That’s one reason why Lagarde’s analysis of the inflation risks will be so important this time. Financial markets have started to factor in a rate hike at the end of next year, ignoring warnings from policy makers that such bets are out of step with their guidance.

For the ECB, which uses financing conditions as a guide to its policy, if left unchecked such moves would complicate its ability to eventually phase out crisis stimulus.

So Lagarde faces the task of reminding investors how serious the ECB is about its pledge to keep rates at ultra-low level until inflation sustainably meets their new 2% target -- something the latest projections don’t see happening in the next two years.

Although not a decision for this month, overshadowing the ECB is its need to determine the future of stimulus. Economists in a Bloomberg survey expect officials to ultimately boost their older bond-buying program, which is currently running at 20 billion euros per month.

The question they need to resolve is whether to retain some of the flexibility that characterized the ECB’s response to the pandemic as a weapon to address market stress. That could also be achieved by creating an entirely new program, which is already being studied, according to people familiar with the matter.

Recent comments by policy makers have offered a glimpse of the debate ahead. Lagarde may well decide to keep the matter open in order that both camps -- those in favor of keeping flexibility and those who are more skeptical -- stay happy for now.