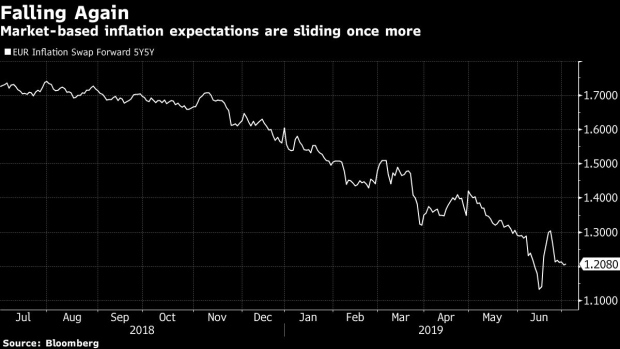 (Bloomberg) -- European Central Bank policy makers aren’t yet ready to rush into additional monetary stimulus at this month’s meeting, preferring instead to wait for more data on the economy, according to euro-area central-bank officials familiar with the matter.

While Governing Council members agree that they could act on July 25 if the outlook deteriorates, they are currently leaning toward the following meeting in September when they’ll have updated economic forecasts to back up their decision, the people said. The council might tweak its policy language this month to signal more stimulus is imminent.

The officials asked not to be identified as the discussions are informal. A spokesman for the ECB declined to comment.

A delay also leaves the market more exposed to shocks over the summer months when liquidity is thinner. The prospect of escalating trade tensions was highlighted on Monday when the U.S. proposed adding more tariffs to European Union goods because of a dispute between Boeing Co. and Airbus SE.

“The ECB has often taken time to act in the past -- maybe that relates to waiting to build a consensus,” said Nick Kounis, an economist at ABN Amro NV in Amsterdam who expects a change in policy language in July and a 10 basis point cut in September. “Having said all that, I think there is a clear case for the ECB to act already in July on the basis of the inflation outlook, inflation expectations and downside risks to growth -- I’m just not sure whether the Governing Council is there yet.”

Another risk is the U.S. Federal Reserve’s interest-rate decision on July 31, a week after the ECB meeting. If the Fed cuts interest rates as expected -- perhaps by 50 basis points -- the euro could surge against the dollar. That undermines euro-zone inflation by depressing import costs and weighs on growth by making the bloc’s exports more expensive.

“We forecast the ECB will change the wording of its forward guidance at the July meeting to signal an easing bias. We expect the deposit rate to be lowered by 10 basis points in September.”-- David Powell and Maeva Cousin. See their ECB INSIGHT

Another lingering concern is the ECB’s succession plan. President Mario Draghi’s term ends on Oct. 31 and EU leaders haven’t yet resolved differences over a suite of top policy positions in the bloc. They may not decide on the presidency of the central bank until September.

That could be unsettling for investors by increasing uncertainty over the policy outlook. One way out of that would be to put more stimulus in place early, even if that effectively ties the next president’s hands for the first several months.

Expectations for more monetary stimulus increased after Draghi sprung a surprise policy statement on June 18, saying action will be needed “in the absence of improvement” in inflation. That’s different from the Governing Council’s meeting only two weeks previously, when he said action would be needed in the event of “adverse contingencies.”

He also said Governing Council members would deliberate “in the coming weeks” on how to adapt their stimulus.

The six-member Executive Board, which makes policy proposals, could yet try to force the Governing Council’s hand. Chief economist Philip Lane warned in a speech on Monday that “it is essential that a central bank shows consistency in its monetary policy decisions by proactively responding to shocks.”

Still, the Governing Council could opt to shift its policy in two steps, according to the euro-area officials. That might involve changing the policy language in July to signal that easing is likely in September. The current wording says interest rates will stay at “present levels” at least through the middle of next year.

Holding off from action for now will also give policy makers time to review data such as second-quarter GDP, due at the end of this month. That will confirm whether, as feared, the pick-up in euro-zone economic growth at the start of the year was only temporary.

“There is no need to rush -- central banks in general are getting ready to act on the back of the risk outlook, with the hard data mixed,” said Anatoli Annenkov, a senior economist at Societe Generale. “The ECB should have a better sense of where the economy is heading in September, with confidence, credit and labor markets in focus until then.”

(Updates with euro, comment from economist starting in fourth paragraph.)

--With assistance from Balazs Penz.