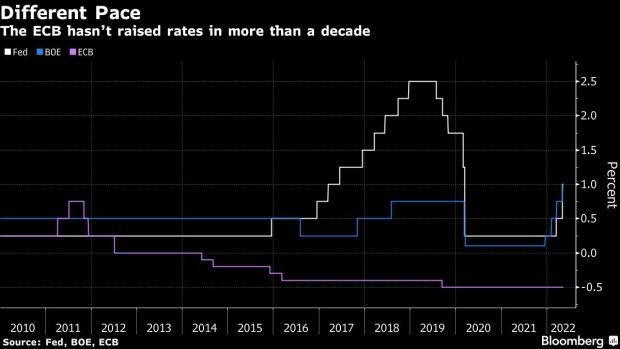 (Bloomberg) -- European Central Bank Vice President Luis de Guindos said it’s sensible to assume negative interest rates will be gone by the end of the third quarter, and said the prospect of more aggressive hikes will depend on the economic outlook.

In an interview with Bloomberg Television, he endorsed President Christine Lagarde’s monetary policy roadmap signaling two quarter-point increases. When asked if there could be a case for bigger moves as sought by some officials, he said that such a decision would hang on the data and forecasts available at the time.

“The indications that the president has given are very sensible, they are very prudent,” Guindos said. The ECB will discontinue asset purchases in the third quarter, and “it’s quite clear that this permits that we will have the first rate hike in July and I think that you know it’s sensible to say that at the end of the third quarter, well negative rates will be a history of the past.”

The path of policy will be determined by new economic forecasts for the June 9 decision. Those projections won’t be “very different” from the ones the European Commission published last week, Guindos said.

Asked whether the deposit rate -- currently at -0.5% -- could already be positive by September, a situation that would warrant at least one rate hike of more than the conventional quarter point, he said “it will depend on the outlook.”

“Let’s see what happens,” Guindos said. “You know we are data dependent -- and we always stress that part.”

Until now, three policy makers have publicly entertained the idea of a half-point move to show the ECB’s resolve in fighting inflation that held at a record 7.4% in April.

Dutch central bank governor Klaas Knot said on May 17 he could consider such a step if the inflation outlook worsens. This week, Latvia’s Martins Kazaks agreed that an increase of that magnitude could be discussed, while Austria’s Robert Holzmann insisted it’s already “appropriate.”

Lagarde herself said the ECB won’t rush into withdrawing stimulus, while Executive Board member Fabio Panetta urged a cautious approach amid a “clear weakening of soft leading indicators” and signs of economic stress.

Guindos said the euro-area will face “much lower growth” than previously expected, though a recession -- defined by two consecutive quarters of declining output -- still isn’t likely.

At the same time, projections for consumer prices will have to be revised up. Inflation will be hovering around 7% over the next months, he said, before slowing in the fourth quarter and converging “to a much lower level in 2023 -- around 3%.”

While nominal sovereign bond yields have gone up across the 19-nation region and spreads have widened, the moves are “not comparable to the situation that we had in the past, in the previous debt crisis at all,” Guindos said.

Even so, “in order to avoid fragmentation, at the end of the day, those countries that have, you know, let’s say a weaker fiscal profile with higher debt, higher structural deficit, will have to put in place prudent, but very clear programs in order to guarantee fiscal sustainability,” he said.

Guindos, a former Spanish finance minister, added that fiscal policy has a “very important role to play” in the current crisis.

“It has to be much more targeted, much more selective, much more temporary than it was for instance during the times of the pandemic,” he said.