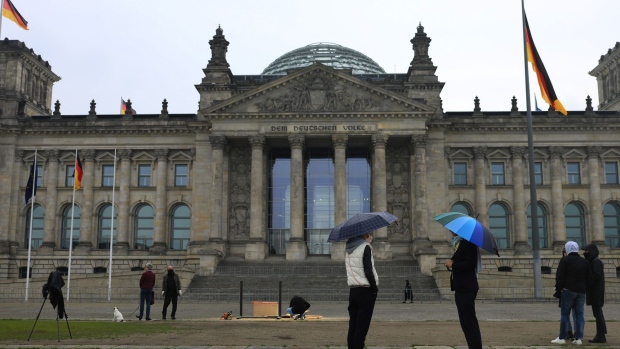 Pedestrians shelter under umbrellas outside the Bundestag building in Berlin, Germany, on Monday, May 4, 2020. Germany reported the lowest number of new coronavirus infections and deaths since at least March 30, as the country continues a gradual easing of curbs on public life and allows the economy to slowly restart. Photographer: Krisztian Bocsi/Bloomberg , Bloomberg

(Bloomberg) -- Germany’s lower house of parliament this week will seek to end a standoff over the European Central Bank’s bond buying program that was triggered by the country’s constitutional court last month.

Legislators will deliberate on documents provided by the ECB to explain the program during a public session in the plenary or behind closed doors in a parliamentary committee, according to people with direct knowledge of the discussion. Finance Minister Olaf Scholz received the report from the Bundesbank and passed it on to Bundestag President Wolfgang Schaeuble, said the people who asked not to be named because the plans are not public.

Germany’s top court ruled in May that the 2.2 trillion-euro ($2.5 trillion) public-sector purchase program could be illegal. The judges said the German parliament should have challenged the ECB to show that it had considered adverse side effects, such as depressed returns on savings as well as financial instability. The judges ruled that if the program isn’t shown within three months to be “proportionate” to the risks then the Bundesbank, the biggest buyer, will have to withdraw.

Scholz told Schaeuble that the ECB has fulfilled the demands of the constitutional court and that the Bundesbank is “permitted to continue to participate in the implementation and execution” of the so-called Public Sector Purchase Program, or PSPP, the Frankfurter Allgemeine Zeitung reported earlier.

The ruling triggered a debate as to whether a national court was infringing on ECB independence and seeking to override the EU’s top tribunal. After weeks of seeking a way out of the stalemate, the ECB agreed to provide the documents explaining the bond buying program to Bundesbank President Jens Weidmann.