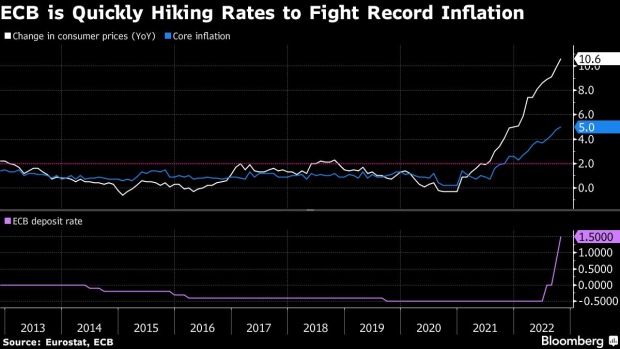 Signage for the European Central Bank (ECB) outside the bank's headquarters in Frankfurt, Germany, on Monday, May 23, 2022. While ECB policy makers have increasingly coalesced around the prospect of a first hike at their July 21 meeting in recent weeks, they have barely mentioned the possibility of a more aggressive half-point move such as the US Federal Reserve delivered this month. Photographer: Alex Kraus/Bloomberg , Bloomberg

Those who preferred a less aggressive step cited the fact that the hike was accompanied by other monetary-tightening measures including a change in the remuneration of minimum reserves, and the adjustment of the terms of cheap financing for banks, according to the account, published Thursday.

After back-to-back increases of 75 basis points to stem the quickest price gains since the euro was introduced, investors are wondering whether the ECB will ease off when it next sets monetary policy in mid-December.

There are reasons for caution: a recession is growing ever likelier in the 19-nation euro zone and Russia’s war in Ukraine is maintaining huge levels of uncertainty. But unprecedented inflation -- at more than five times the 2% target -- is the main focus. November data due next week are likely to steer policy makers in the coming weeks.

The ECB’s full account can be found here. Below are extracts on some of the key policy areas.

--With assistance from Bastian Benrath.