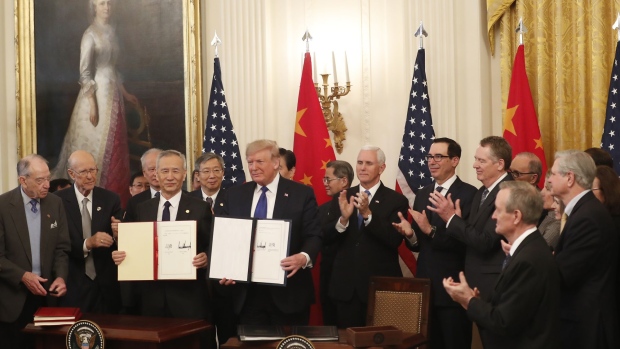 (Bloomberg) -- Economists played down the prospect that the first phase of a trade deal signed this week by the U.S. and China will lift American economic growth in 2020, contradicting the optimism of the Trump administration.

The American Bankers Association’s Economic Advisory Committee-- a group of chief economists from large banks including Citigroup Inc. and Morgan Stanley -- forecast gross domestic product growth would slow to 1.9% in 2019 and stay there in 2020. That’s well below the 2.5% pace floated by Treasury Secretary Steven Mnuchin in a Fox News interview on Sunday. A Bloomberg survey conducted earlier this month estimated the U.S. economy expanded 2.3% last year and will grow 1.8% this year.

The economists cited lingering trade uncertainty as a risk during a press conference in Washington on Thursday, but said strong wage growth, low unemployment and continued job gains would ensure that consumer spending continues to support expansion.

“The concern is that there is still a lot of uncertainty about the relationship, not just between the U.S. and China, but also potential other trade uncertainties going forward with regard to other regions,” Catherine Mann, the committee's chair and Citi’s global chief economist, told reporters.

To contact the reporter on this story: Max Reyes in New York at mreyes125@bloomberg.net

To contact the editors responsible for this story: Scott Lanman at slanman@bloomberg.net, Alister Bull, Ana Monteiro