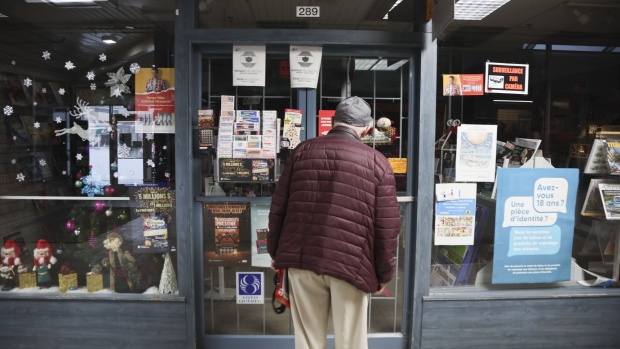 A pedestrian checks the hours on a closed magazine store in Montreal, Quebec, Canada, on Sunday, Jan. 9, 2022. Quebec Premier Francois Legault announced that the province's stores would be closed on three Sundays, with some exceptions, to curb coronavirus hospitalizations. Photographer: Christinne Muschi/Bloomberg , Bloomberg

(Bloomberg) -- Canadian banks are bringing forward their forecasts for interest rate hikes to as early as next week, amid growing evidence the economy is hitting limits and inflation pressures are rising.

Economists at TD Securities and Laurentian Bank said Monday the Bank of Canada will start a hiking cycle at its policy decision on Jan. 26. Bank of Montreal brought forward its call on the first increase to March from April, while Bank of Nova Scotia said the central bank “cannot afford” to wait any longer.

The more hawkish calls follow the release of the Bank of Canada’s quarterly survey of business executives on Monday, which painted a picture of an economy running increasingly hot, with widespread labor shortages, record inflation expectations, and strong demand.

“The context is appropriate for a liftoff next week,” said Dominique Lapointe, an economist with Laurentian Bank Securities, by email

Markets are also pricing in a January hike, with overnight swaps pointing to a greater than 70% chance that the central bank will move next week. The Bank of Canada has kept its overnight rate at the emergency level of 0.25% since March 2020.

For some analysts, the survey data confirmed that risks require the central bank to move sooner than later.

“The Bank of Canada cannot afford to wait any longer to tighten monetary policy,” Derek Holt, an economist with Scotiabank, wrote in a report to investors.

In a Bloomberg News survey of economists earlier this month, only four of 20 analysts predicted a rate increase before April.