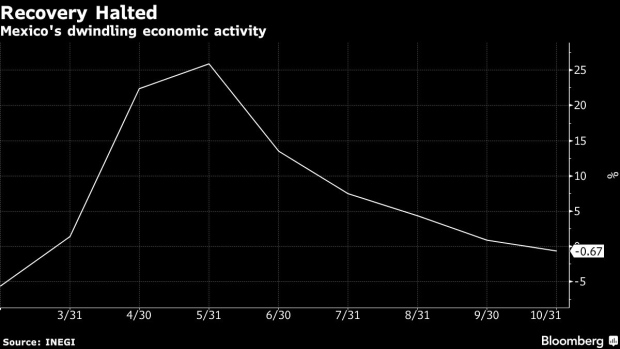 Latin America’s second-biggest economy shrank in the third quarter of last year, putting a halt to a brief recovery from the pandemic. Now a growing number of institutions including Bank of America Corp, Banco Bilbao Vizcaya Argentaria SA, Monex Casa de Bolsa and Bloomberg Economics are forecasting that gross domestic product shrank again in the last three months of 2021.

That would put the country into a technical recession, which is defined as two consecutive quarters of quarter-on-quarter GDP contraction. Data released by the state statistics institute this week projected economic activity fell 0.2% last month, which would mean it dropped in two of the final three months of 2021.

A swath of economists have also cut their growth forecasts for 2022, with Bank of America projecting just 1.5%. Banxico, as the country’s central bank is called, still sees 3.2% expansion this year, though those numbers may yet be revised.

“If 2021 was a year of incomplete recovery, 2022 will be a challenging one,” wrote Banco Base SA economist Gabriela Siller Pagaza, who predicted a range of 1.5% to 2% growth. “We don’t discard more revisions to growth expectations, since there are a lot of downward risks to economic activity.”