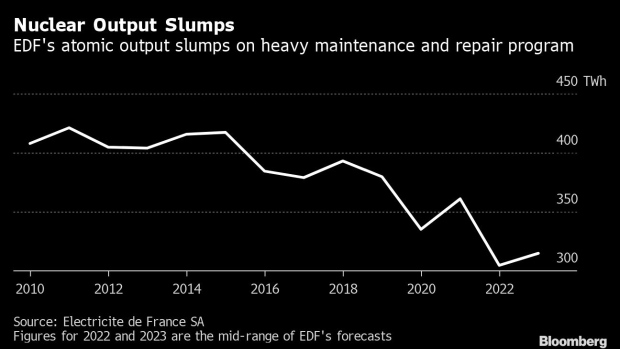 (Bloomberg) -- Electricite de France SA announced measures to bolster its battered finances as a combination of reactor shutdowns and government policies to cap power prices slash its earnings this year.

The utility will sell about 2.5 billion euros ($2.8 billion) of new stock, dispose of more assets and offer investors the option of receiving their dividends in shares instead of cash. EDF’s earnings, which were boosted last year by high power prices, could slump by as much as 70% in 2022 as the company is forced to offer wider discounts on the shrinking volume of electricity it generates.

“The difficulties encountered at the beginning of 2022 have led EDF to implement an action plan,” Chief Executive Officer Jean-Bernard Levy said in a statement on Friday. The company will “continue this strategy in support of the energy transition and France’s industrial and climate objectives.

EDF has already signaled that it would be squeezed this year, with its French atomic output dropping to the lowest in more than three decades due to repairs and maintenance at its fleet of reactors. The situation has been made even worse for the state-controlled company by the French government’s decision to force it to sell more power at a steep discount, to protect consumers and businesses from soaring energy prices.

While the Paris-based utility reported an 11% increase in 2021 earnings before interest, taxes, depreciation and amortization to 18 billion euros, the outlook for 2022 was significantly worse. Government policies could reduce Ebitda this year by about 8 billion euros, with a further 11 billion-euro hit from the decline in its electricity output. Those factors will more than offset the expected gains from higher power prices, EDF said.

On a call with reporters, Levy said EDF isn’t giving specific guidance on the value of its Ebitda for this year, and the company noted in its statement that “other effects” could influence the figure.

To further bolster its balance sheet, EDF said it will sell an additional 3 billion euros of assets from 2022 to 2024. It will also offer investors the option of receiving their dividend payments in shares -- a so-called scrip -- this year and next.

The French government, which owns 84% of EDF, has said it will support the company financially if needed. President Emmanuel Macron wants the utility to remain as the backbone of France’s energy system and is planning to build new atomic plants in coming decades to meet an expected increase in electricity demand. EDF’s 56 atomic reactors typically generate more than two-thirds of the country’s power output.

France is also traditionally a large exporter of electricity, meaning that production issues at EDF tend to reduce security of supply in neighboring countries. That in turn is boosting the price of power and carbon-emissions permits in the region.