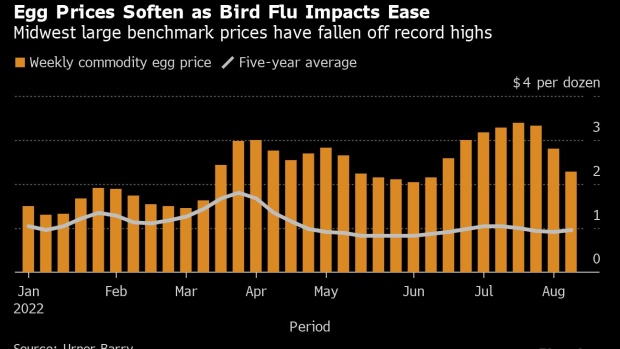 A shopper checks a carton of eggs inside a grocery store in San Francisco, California, U.S., on Monday, May 2, 2022. U.S. inflation-adjusted consumer spending rose in March despite intense price pressures, indicating households still have solid appetites and wherewithal for shopping. , Bloomberg

(Bloomberg) -- Egg prices that rocketed to record highs after one the worst bird flu outbreaks in US history are now falling — fast — as the industry replaces dead hens.

Midwest large eggs, the benchmark for commodity price, closed at $2.16 a dozen on Friday, down about 37% from late July’s record high, according to commodity researcher Urner Barry.  That’ll provide relief for consumers, who saw egg prices jump 47% at US grocery stores last month during the worst period of food inflation since 1979.

Retail rates generally follow commodity prices, so consumers should see a “significant” drop by more than a dollar per dozen in the next 30 days, said John Brunnquell, chief executive officer of Egg Innovations, one of the biggest US producers of free-range eggs.

Farms are repopulating birds that they had to kill during this year’s highly pathogenic avian influenza  outbreak, Brunnquell said in a phone interview. That means more hens will be around to lay eggs, which will help the supply shortcomings caused by the virus. The outbreak killed more than 30 million commercial and wild birds.

Demand was pretty lackluster earlier this year so the loss of production wasn’t felt too strongly, said Karyn Rispoli, egg market reporter at Urner Barry. She said prices soared when demand rose in June, but now high shelf prices have softened appetite for eggs. The Midwest large variety have dropped by more than $1 per dozen since July 27 and current wholesale trading suggests the trend will continue, she said.

“There is more room to correct,” Rispoli said.