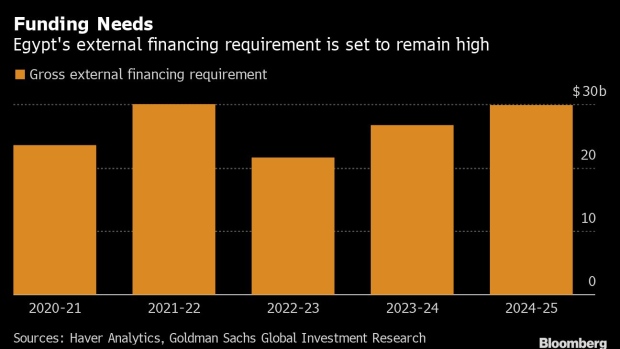 Customers shop for fresh fruit and vegetables at the Al-Monira market in Cairo, Egypt, on Wednesday, June 1, 2022. Global food prices are soaring near the fastest pace ever as Russia’s invasion of Ukraine chokes crop supplies, with Egypt, the world’s biggest wheat buyer, now grappling with higher import bills as the conflict causes a run-up in grain and energy costs. Photographer: Islam Safwat/Bloomberg , Bloomberg

Egypt’s monetary policy is up in the air after the shock resignation of the central bank governor just a day before a scheduled decision on interest rates.

The meeting on Thursday caps a week of drama at the central bank, with pressure mounting on the currency after the economy came under strain from the spillover effects of Russia’s invasion of Ukraine. Financier and United Media Services Chairman Hassan Abdalla was picked as acting governor, according to state-run Al-Ahram newspaper.

Before Tarek Amer’s departure, most economists expected the central bank to deliver its third rate hike of the year to tackle inflation. But analysts surveyed by Bloomberg are now split, with six of 12 predicting that the benchmark deposit rate will stay at 11.25% for the second straight time. The rest see an increase of 50 to 200 basis points.

The agenda for the meeting may range beyond rates, however, after speculation that Egypt needs a weaker currency to absorb shocks from abroad. The government has been seeking a new loan from the International Monetary Fund, which favors a more flexible exchange rate.

“Amer has been a strong advocate of the stable pound policy, so markets are reading into his resignation the possibility of greater FX flexibility going forward,” said Farouk Soussa, an economist at Goldman Sachs Group Inc. in London.

Amer quit after almost seven years in the job and was appointed an adviser to President Abdel-Fattah El-Sisi. No reason was given for the move.

Egypt already enacted its largest rate hike in almost a half-decade in May, one of many steps the North African nation is taking to blunt the economic impact of Russia’s invasion of its neighbor. The conflict has sent Egypt’s wheat and fuel bills soaring and contributed to an exodus of $20 billion in foreign portfolio outflows. Gulf allies have offered aid and investment to shore up the economy.

“The resignation of Egypt central bank Governor Tarek Amer may indicate a shift in the country’s exchange-rate policy. The near-fixing of the pound to the dollar since 2017 -- despite the pandemic, rising global interest rates and higher food and energy costs -- has intensified the downward pressure on the currency. An adjustment is needed and it may be coming.”

Rates may need to go higher still, since an upsurge in consumer costs is showing little sign of slowing and with Egypt keen to revive foreign interest in its debt. Price pressures have pushed Egypt’s inflation-adjusted rates below zero, undercutting what had been its long-held appeal for overseas investors in debt.

“We see the need for tighter monetary policy” given Egypt’s negative real rate and “the outlook for a further rise in the inflation rate in the coming months,” Monica Malik, chief economist at Abu Dhabi Commercial Bank PJSC, said after the news. She predicted a 1 percentage point hike.

Annual inflation hit 13.6% in July, its highest level in more than three years, adding to consumer woes in the region’s most populous nation. It was partly spurred by a 17% climb in transportation costs caused by the government’s decision to raise prices at the pumps. More rises may be on the way.

A recent weakening of Egypt’s pound, which comes after it lost 15% of its value in March, is also a reflection of the pressures on the economy. An increasing number of investors and economists have said another devaluation is needed to reduce Egypt’s funding gap.

A rate hike could bolster appetite that already shows signs of returning; June saw foreign holdings in Treasury bills rise for the first time in months, according to official data.

“Some additional tightening is appropriate at this stage given expectations of further fuel-price rises and more weakness in the pound,” said Mohamed Abu Basha, head of macroeconomic research at investment bank EFG Hermes.

(Updates with appointment of acting governor in second paragraph.)