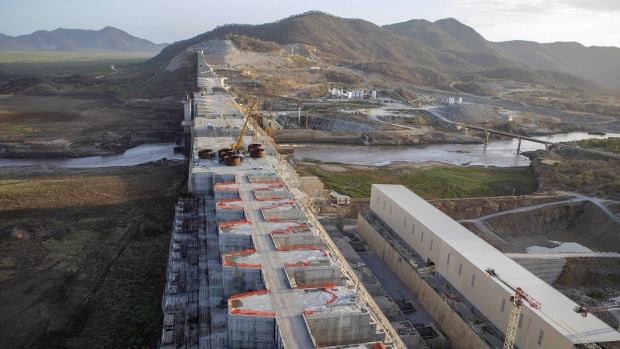 Construction machinery stands in the center of the dam wall at the site of the under-construction Grand Ethiopian Renaissance Dam in the Benishangul-Gumuz Region of Ethiopia, on Tuesday, May 21, 2019. Despite a decade of annual growth rates as high as 10%, and a pipeline of major Chinese investments, Ethiopia remains a desperately poor country with a GDP per capita below $1,000. Photographer: Zacharias Abubeker/Bloomberg , Bloomberg

(Bloomberg) -- Egypt and Sudan condemned Ethiopia’s start of the second phase of filling a controversial Nile dam, warning the move violates existing agreements and threatens security in the region.

The comments, in a statement from the Egyptian Foreign Ministry, came after the two countries said they’d been informed by Ethiopia that it had resumed filling the Grand Ethiopian Renaissance Dam -- a project the two North African nations fear will curtail their access to a vital source of fresh water. Egypt is taking its case to the United Nations Security Council this week.