The pipeline of potential new copper capacity is low, and it takes a long time to create new mines, the hedge fund manager said Wednesday at the Sohn Investment Conference, which was held virtually this year. Demand is poised to outstrip supply in 2024, leading to higher copper prices, Einhorn said.

The gathering pace of a global recovery from the pandemic has driven up the prices of commodities from copper to corn, with the Bloomberg Commodity Spot Index climbing to a decade high.

Einhorn, 52, ticked off several catalysts for higher copper prices, including Bitcoin mining and a “gold rush” in electric vehicles, which contain four-times more copper than conventional cars. Vast amounts of copper wiring are also needed in roadside chargers to keep them running.

Teck Resources, which Einhorn described as “overlooked,” has underperformed mining peer Freeport-McMoran Inc. over the past year. Teck trades at two-third of Freeport’s price-to-earnings multiple “and has much better growth prospects,” he said, noting that the Vancouver-based company is in the middle of an expansion project in Chile. 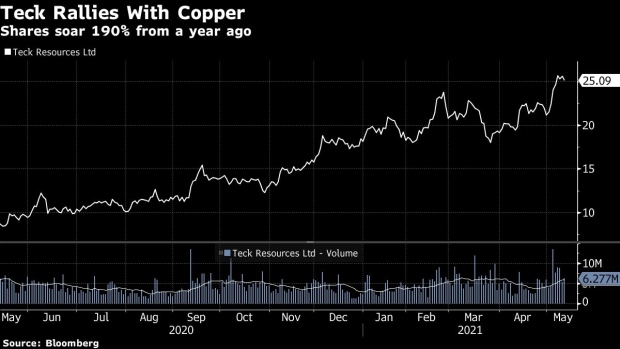 Its stock has surged about 190 per cent in the past year, while Freeport-McMoran has almost quintupled.

Greenlight, which oversaw US$2.2 billion at the start of the year, gained 2.4 per cent through April, according to a person familiar with the matter. While Einhorn’s value-investing strategy has fallen out of step with markets in recent years, he has vowed to rework his portfolio by making fewer, more concentrated bets.