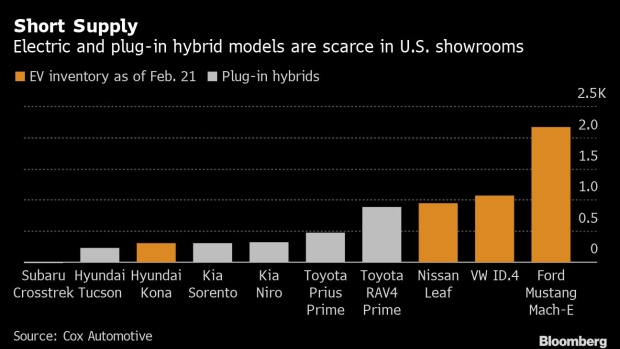 An electric car stencil symbol sits on a parking space at the electric vehicle charging site operated by Enercity AG in Hanover, Germany, on Thursday, July 23, 2020. Europe’s largest car market is rolling out a nationwide electric car charging infrastructure by 2030 in an effort to rein in transport emissions. , Bloomberg

(Bloomberg) -- Spiking gasoline prices have hiked Americans’ monthly bills to fuel popular pickups and SUVs by hundreds of dollars, which is leading more consumers to kick the tires on electric vehicles.

There’s just one problem: there aren’t many such wheels to boot.

Electric vehicles are in short supply in showrooms that have struggled to rebuild inventory of vehicles for more than a year, largely due to the global chip shortage. As of late last month, there were fewer than 2,200 Ford Mustang Mach-Es available in the U.S., according to Cox Automotive. Volkswagen AG had just over 1,000 ID.4 crossovers in stock, and Nissan Motor Co.’s supply of Leaf hatchbacks was at just 950 units.

Automakers are in a different position than in 2008, the only other time when regular unleaded was over $4 a gallon across the U.S. Tesla Inc.’s lone model then was the Roadster, which sold in low volumes for six-figure sums. Conventional hybrids that didn’t plug-in, led by Toyota’s Prius, were all the rage. Detroit’s dependence on gas guzzlers helped push General Motors and Chrysler into Chapter 11, and Ford Motor Co. narrowly avoided bankruptcy.

While there are now far more models to choose from, EVs are both sparse and expensive. Consider the pickup segment, home to the best-selling vehicle in the U.S. for 40 years running, Ford Motor Co.’s F-Series. The only electric models on the market for the moment are Rivian Automotive Inc.’s R1T, which starts at $67,500, and General Motors Co.’s even-pricier GMC Hummer.

In some cases, these prices are heading even higher. Rivian earlier this month raised the sticker on its R1T pickup by 17% and its R1S SUV by 20%, citing higher input costs and the shortage of semiconductors. Tesla bumped up the price of certain Model 3 sedans and Model Y SUVs by $1,000 this week.

This state of play could disappoint prospective car buyers who are increasingly looking at electrics. Pat Ryan, founder and chief executive officer of CoPilot, a shopping app, said that while consumers have not let up from looking at bigger vehicles, “we’re seeing increased search on electrics and hybrids, and we’re seeing an increase in pricing.”

The cost of used EVs and hybrids also are on the rise. Tesla models have increased the most, by about $500 on one- to three-year-old models, Ryan said.

“The payback in fuel savings is a very long period of time,” Cox’s Krebs said.