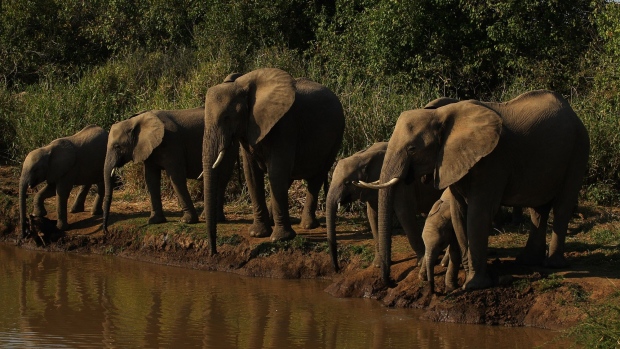 MASHATU, BOTSWANA - JULY 27: A herd of elephants drink from a river at the Mashatu game reserve on July 27, 2010 in Mapungubwe, Botswana. Mashatu is a 46,000 hectare reserve located in Eastern Botswana where the Shashe river and Limpopo river meet. (Photo by Cameron Spencer/Getty Images) , Getty Images

(Bloomberg) -- Zimbabwe failed to get a continent-wide stance on the trade in live elephants and ivory as several nations where the animals are endangered stayed away from a conference that aimed to see Africa present a united front at an international meeting on wildlife trade later this year.

Only seven out of the more than a dozen African nations invited attended the three-day elephant summit in Hwange National Park, Zimbabwe’s largest park, on the edge of the Kavango-Zambezi Transfrontier Conservation Area -- a region bigger than Spain that spans five countries and is home to more than half of the world’s African elephants.

The elephant summit comes ahead of the Cop19 meeting in Panama set to take place later this year where Southern African nations, where populations of the animals are rising, plan to lobby for the restrictions on live elephant trade and the total ban on ivory to be eased.

“We called for this conference with the hope that we could invite a few other African countries outside the Southern African Development Community with whom we differ in terms of conservation approach,” Mangaliso Ndlovu, Zimbabwe’s environment, climate, tourism and hospitality minister said in an address to delegates on Thursday.

Kenya, a vehement opponent of the resumption of ivory trade, Senegal and Rwanda did not accept the invite.

The nations in attendance included Botswana, Namibia, South Africa, Tanzania and Zambia. These together have a combined population of over half of the world’s African elephants. The southern African nations are battling increased instances of elephants stealing crops and killing farmers and diminished habitat for other animals as the giant mammals tear down trees. Zimbabwe and its neighbors say they are sitting on ivory stockpiles worth hundreds of millions of dollars.

The summit urged the countries to consider funding and finance options and how to draw value out of ivory stockpiles. The bond markets and blended financing mechanism similar to those in the climate change arena are some considerations to be further looked into, according to Ndlovu, who did not give further details.

“We need to do things differently this time around. We have been negotiating for more than 40 years and the results have continuously been against us,” he said. “We now need different approaches, some radical.”