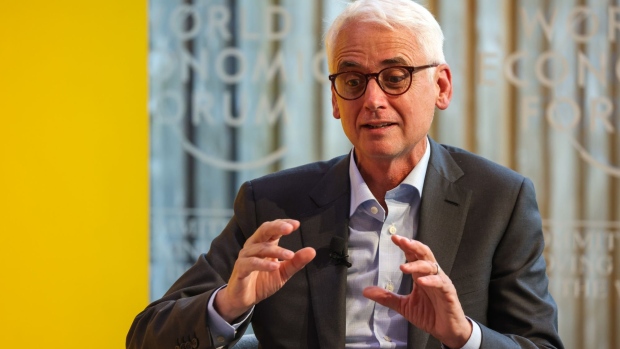 David Kenny, chief executive officer of Nielsen Holdings Plc, speaks during a panel session on the opening day of the World Economic Forum (WEF) in Davos, Switzerland, on Monday, May 23, 2022. The annual Davos gathering of political leaders, top executives and celebrities runs from May 22 to 26. , Bloomberg

(Bloomberg) -- Shares in Nielsen Holdings Plc soared Tuesday after the consumer data company said its largest shareholder was in talks to join a consortium poised to take over the company.

Nielsen said in a statement it was postponing a shareholder vote set for Tuesday to vote on the takeover, which is being led by the private equity arms of activist investor Elliott Investment Management and Brookfield Asset Management.

The meeting was being postponed to allow the consortium to finalize a preliminary agreement with WindAcre Partnership, which owns a 27% stake in Nielsen and had opposed the deal, Nielsen said.

Houston-based WindAcre had taken steps to sink the deal, including by trying to prevent the company from going private through a tender offer, which requires support from a simple majority of shareholders, instead of the UK standard that requires 75% support.

Elliott and Brookfield agreed to acquire Nielsen in March for $28 a share. WindAcre had argued that the price undervalued the company, and that its shares could be worth $80 apiece by 2025.

Nielsen’s shares have traded below the offer price since the deal was announced.

Under the terms preliminary agreement being finalized Tuesday, the company said WindAcre would join the consortium and would receive $28 ar share -- the same price that will be paid to all other shareholders for its remaining shares.

The company said there’s no guarantee the deal would be completed, but if it was, a shareholder vote would be set “as expeditiously as possible.”