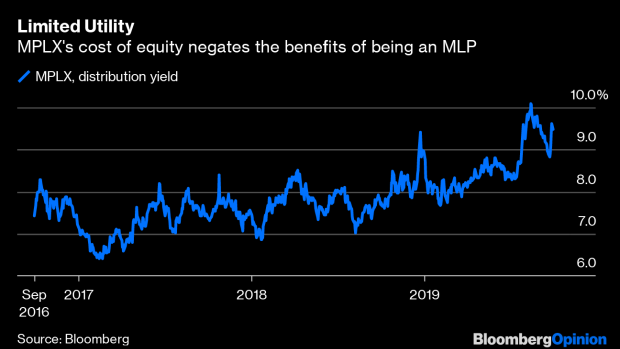 CHICAGO, IL - MAY 22: A sign marks the location of a Marathon gas station on May 22, 2014 in Chicago, Illinois. Marathon Petroleum Corp. has agreed to purchase Hess gasoline stations for $2.6 billion. The acquisition will expand Marathon Petroleums retail presence from nine to 23 states. (Photo by Scott Olson/Getty Images) , Photographer: Scott Olson/Getty Images North America

Elliott Management Corp.’s call for splitting Marathon in three has garnered support from a couple of other shareholders now pushing CEO Gary Heminger to step down. Marathon’s board says it stands behind Heminger, but the persistent discount in the stock versus its sum-of-the-parts value should keep the issue of a corporate overhaul alive. While the future of retail arm Speedway looks like the most contentious area, Elliott’s suggestion of converting Marathon’s MLP, called MPLX LP, into a regular C-Corp and spinning it off looks less controversial.

Such conversions have become commonplace. Problems with governance, debt, tax reform and general energy exposure have crushed MLP valuations, eroding their main reason for existing, namely as a cheap source of capital. MPLX now sports a distribution yield of about 9.5%. Converting to a C-Corp, as many others have done, would open up a wider pool of investors.

That could be great for MPLX; less so for MLPs.

I wrote here back in May about the shrinking MLP pool. Since then, a few partnerships have disappeared, including Andeavor Logistics LP, which was bought by MPLX. Meanwhile, Tallgrass Energy LP has received a buyout offer (of sorts), and Kinder Morgan Canada Ltd. should disappear by the end of the year. Plus, with Occidental Petroleum Corp. trying to pay off the debt from its acquisition of Anadarko Petroleum Corp., Western Midstream Partners LP also could be exiting the scene.

Here are updated charts breaking down 83 North American energy infrastructure companies (not including utilities) into their respective groups, weighted by market cap and free float. The dominance of the C-Corps is pretty clear:

An MPLX conversion would have a big impact. With a market cap of roughly $30 billion(1), MPLX represents about 11% of North American energy partnerships’ aggregate value. It’s also the largest member of the Alerian MLP Index. Assume MPLX converts and is spun off, plus Buckeye Partners LP(2), Tallgrass, Kinder Morgan Canada and Western Midstream all disappear. Under that scenario, C-Corps would jump from about 62% of the aggregate free float of energy infrastructure firms to more than two-thirds. Meanwhile, outside of C-Corps and the big four, we would be left with a long tail of 61 companies with a combined free float of just $48 billion, averaging less than $800 million each.

And the dwindling ranks of the Alerian MLP index would thin further; MPLX, Tallgrass and Western Midstream account for a fifth of its weighting. The relative weighting of smaller partnerships with lower-quality midstream assets would increase. For example, all else equal, Genesis Energy LP, which houses everything from soda-ash production to pipelines to shipping, could enter the top 10 of the index’s holdings.

A vicious cycle is at work here. As generalist investors have withdrawn, so MLP valuations have remained subdued despite some recovery in energy prices and continued growth in U.S. physical energy flows. This, along with governance concerns, persuades more partnerships to either sell out or give up on the structure, reducing the pool of available investments, which in turn leads to investment mandates and specialist funds migrating away.

Earlier this month, large pension funds in Iowa and Oklahoma effectively eliminated asset allocations to MLPs, with Teachers’ Retirement System of Oklahoma noting a number of drawbacks, including an “extremely small universe of securities relative to other asset classes.” In his latest weekly roundup of the sector, Hinds Howard at CBRE Clarion Securities noted that after a year of trying to deal with weak performance and growing concentration, institutions are “throwing in the towel,” with allocations “being diverted to listed infrastructure strategies, private equity or just plain old global equities.” He adds:

MLPs have lost the special designation as a separate allocation within real assets that the sector has enjoyed over the years. That fund flow headwind is the biggest impediment to midstream performance [for] the rest of 2019, especially if oil prices are going to remain a headwind.

Of course, even if MLPs are shrinking in importance, the hard assets they own remain and can be invested in under other structures. BP Capital Fund Advisors LLC is touting the catchily named UBS E-TRACS NYSE Pickens Core Midstream Index ETN, which includes allocations to C-Corps, with a recent report subtitled: “Is your midstream exchange traded product still relevant?” Some funds have taken an holistic approach to energy infrastructure for years, notably the First Trust North American Energy Infrastructure Fund, which mixes partnerships with C-Corps and even utilities, and the Voya CBRE Global Infrastructure Fund, which extends beyond energy-related infrastructure.

Looking at the relative performance, it isn’t hard to see why. And as more MLP constituents either change identity or leave altogether, more institutional money will follow.

- With graphics by Elaine He

(2) IFM Investors agreed to buy Buckeye for $11.1 billion (including assumed debt) in May 2019, with completion expected by the end of the year.