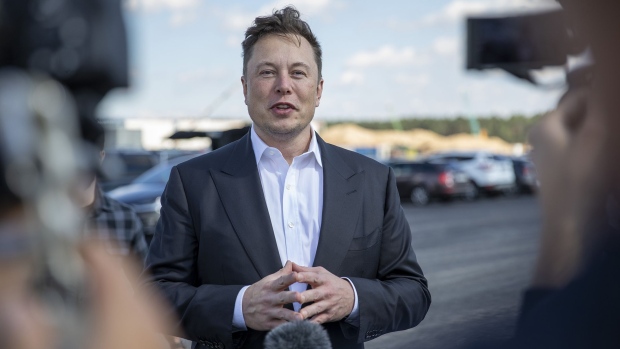 (Bloomberg) -- No one can bring together a bunch of different memes like Elon Musk.Late on Sunday, the Tesla Inc. CEO and internet provocateur tweeted:

There’s a tendency to dismiss a lot of memes — such as the obsession with funny numbers like 420 and 69 — as total nonsense.But there’s more and more evidence that they’re actually starting to matter for institutional traders and investment.Sam Bankman-Fried’s crypto-exchange FTX, for instance, recently raised $420 million in funding from 69 investors including serious players like Singapore’s gigantic state investment company Temasek and the Ontario Teachers’ Pension Plan Board. Viewed in the context of internet jokes, Bitcoin’s record high of around $69,000 makes sense.Former Odd Lots guest and Spectra Markets trader Brent Donnelly has encouraged crypto traders to embrace the nonsense and factor in the meme world's love of silly and also big round numbers into their strategy. Looking at transaction level data from Gemini, he shows that Bitcoin’s highs and lows are much more likely to fall on round numbers, or those with a ‘00’ or ‘50’ in their last two digits.

He also finds a slight bias towards ‘420,’ though it’s not yet big enough to be statistically significant.

So while there's a tendency to dismiss amusing numbers and round figures as pure internet silliness, the point is that internet silliness can matter in the brave new world of crypto and meme investing that Elon Musk so aptly embodies. Traders who recognize and factor the nonsense into their strategies could end up having an advantage over those who don’t.Or as Donnelly concludes:

“The takeaways are simple once you know where the uneven parts of the distribution lie. If you leave an order to buy bitcoin at, say $47,301, you are statistically more likely to get filled than the person with an order at $47,300 or $47,299 because the majority of buy orders will be on the round number at $47,300. Most days, you’ll probably get filled at any one of those three levels, but the occasional time you get filled at 01 when you would not have got filled on or below the round number can have a big impact on your performance. It can be the difference between a red or a green P&L day.On the flip side, if you are leaving stop loss orders, always leave them on the correct side of the round or meme number. Sell stops should be below 00 and buy stops should be above. Anyone leaving a bitcoin sell order at $69,501 this week probably doesn’t know what they are doing. On the other hand, the ones that sold at $68.998 are probably expert traders that understand markets, memes, and crowd psychology.”

You can listen to the episode with Donnelly over here or read the transcript here.