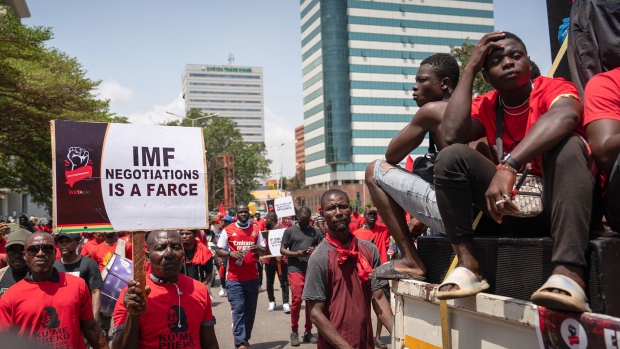 (Bloomberg) -- A few blocks from Ghana’s statehouse in Accra sits a 14.5 acre parcel of prime real estate with a football field-sized hole in the middle of it. What should be emerging from the ground is the frame and sweeping, concave roof of the futuristic 5,000-seat National Cathedral of Ghana. Instead the project has stalled, a victim of an economic crisis in the West African country, which was until recently one of the world’s fastest-growing economies and a magnet for foreign investment.

The cathedral’s original price tag of $100 million has quadrupled amid an economic crisis that has seen record inflation and the cedi, the world’s worst performing currency this year, lose close to 60% of its value — almost double that of Ukraine.

With debt interest payments eating up more than half of government revenues Ghana has asked the IMF for a $3 billion bailout, proposed a debt restructuring that could involve losses of up to 30% for foreign investors and is planning to barter some of the gold it produces for oil. It represents a sharp reversal in fortune from sub-Saharan success story to the harbinger of what awaits several emerging markets that borrowed heavily at a time of low interest rates but now face expensive repayments.

The government in Accra has already spent more than $58 million on the cathedral with nearly half going to the firm of star architect Sir David Adjaye. The project has become one of the most high-profile in a decade-long spending spree by successive Ghanaian governments after debt forgiveness in 2006, the discovery of oil and the issuance of its first eurobond in 2007 helped boost growth.

The country of 31 million people embodies a period when emerging-market borrowing by sovereign nations surged, hitting a record total of $250 billion in 2020, according to Bloomberg data. But its plight is a test case: if a country that until very recently was a darling of lenders is struggling to dig its way out of this crisis, how will other frontier markets fare?

The country’s economic descent has been swift. In February 2020 it raised $3 billion in a debt auction that the government said was five times oversubscribed. A little over a year later it was locked out of international debt markets altogether. Since January, it has repeatedly been downgraded into junk status by rating agencies.

It is not alone. At least 15 of the 72 emerging markets in a Bloomberg index including Ethiopia, Pakistan and Tajikistan  now have dollar debt trading at distressed levels, after Russia's invasion of Ukraine fueled global energy and food price inflation. Central banks have responded by increasing interest rates, which has shrunk the available liquidity for junk-rated nations. At least $80 billion has flowed out of emerging-market debt funds this year.

Although there has been a small rally in the bond market in recent weeks, distressed debt in emerging markets remains a serious weak spot in a global economy preparing for recession. Governments in developing countries need to refinance $215 billion of debt coming due in the next two years. But many can no longer borrow. Among those most exposed to distressed debt are asset managers such as Allianz SE, BlackRock Inc and Fidelity Investments.

“We expect the borrowing conditions for emerging markets to stay difficult and rates to remain high,” said Guillermo Osses, head of emerging-market debt strategies at hedge fund manager Man GLG, which has run the best performing EM fund this year. “Around 15 countries have sovereign bonds trading at distressed levels, and there is no option for them to refinance the current level of debts at these rates. They will have to either go to the IMF, devalue their currencies or restructure the debt.”

Along with dozens of other developing countries Ghana benefited from a debt-relief initiative run by the IMF and World Bank in the early 2000s, which wiped about $4 billion off its debt stock by 2006. That shift from mostly concessional funding before 2007 to largely commercial borrowing afterwards was transformational for Ghana, says Bright Simons, an analyst at the Accra-based think tank Imani Centre for Policy and Education.

“This new source of funding was completely different from what we’d experienced in the past — this money was going directly to the budget like a steroid injection straight into the bloodstream,” said Simons. The cathedral “is the perfect example of the spending spree: Ghana behaving like a fabulously rich sultanate in the Gulf rather than a developing country just attaining frontier market status.”

Erasing the ‘stigma of default’

Ghana spent years pitching itself as a business-friendly country that offered political stability, and a place for foreign investors to make outsized returns that they would easily be able to repatriate. Foreign Direct Investment soared to nearly $4 billion in 2019, regularly outstripping neighboring Nigeria, which has an economy over five times larger.

But, as Simons notes, Ghana’s FDI-stock-to-GDP ratio of nearly 80% — compared with a continental average of around 25% — makes it “highly vulnerable to global shifts in sentiment.”

Those shifts have caused domestic problems for President Nana Akufo-Addo. Store closures and street protests over the cost-of-living crisis have sprung up around the country. And the majority of his own ruling party has called for the resignation of Ken Ofori-Atta, the finance minister, who faces a censure motion from parliament over his management of the economy, including spending on the cathedral.

The beginning of commercial oil production in 2010 helped shape Ghana's economic ascent, but stresses in the system have become more apparent. Crude production figures have never matched government projections — it sits at under 200,000 barrels per day, less than half of earlier predictions — and investment in the sector has slowed in recent years.

Along with the impact of the pandemic and the Ukraine war on the economy the government and opposition largely blame each other’s overspending for the crisis that the country finds itself in.

Some current ministers point to a slew of lucrative take-or-pay power contracts awarded by the previous government between 2013 and 2015. Designed to solve a short-term electricity crisis, the deals resulted in private producers setting up plants that can supply 4,600 megawatts, nearly double national peak demand of 2,700 megawatts — leaving the country paying $500 million a year for power it does not use and cannot store. Debt owed to fuel suppliers and the power companies could reach $12.5 billion by 2023.

Read more: Hunger and Blackouts Are Just the Start of the Emerging Market Crisis

Until this year foreign investors held an unusually large slice of domestic debt in Ghana — close to 40% — but that figure is projected to fall below 10% by the end of the year, an exodus that has piled further pressure on the cedi. Meanwhile commercial banks hold about a third of domestic debt and some derived as much as between half and three-quarters of their interest income from government securities in 2021, according to Fitch, giving them a ringside seat in any debt repayment negotiations.

Bondholders are waiting for restructuring proposals on about $21 billion of bonds, including $13  billion of sovereign dollar-denominated debt.

“There is no more stigma around defaulting or restructuring, and this is quite unusual in the context of emerging markets  history. It is part of the natural economic cycle,” said Yerlan Syzdykov, global head of emerging markets at Amundi SA, Europe's biggest money manager which is a member of the Ghana bondholders committee. “What worries me is that loss of stigma of default.”

Ghana has also borrowed to fund infrastructure and social programs that, if properly implemented and paid for, are widely seen as down payments on future development including free secondary school education and a national health service. But critics argue it did too much too quickly at too high a borrowing cost.

The government invested heavily in its power sector, key to industrialization, largely financed by external debt.  “By doing it that way — yes, you build an electricity grid, but you also take yourself to the brink of default, as Egypt has done, and as Kenya is not that far away from, as Pakistan has done,” said Charles Robertson, chief economist at Renaissance Capital.

When the IMF comes calling

Even as Ghana opened talks with the IMF, some government ministers were publicly ridiculing the idea. In late September, Akufo-Addo spent a week touring the country to commission and check on dozens of new projects — roads, schools, a recycling plant, the expansion of the Kumasi airport, and a military hospital without indicating how these expensive projects would be funded.

Despite the mixed messages Ghana does want a deal from the IMF which is visiting Accra this week. And the incentive is clear: it needs the IMF to help restore access to  international capital markets as soon as possible and avoid borrowing from domestic markets at rates as high as 35%. The World Bank projects the country’s total public debt will hit 105% of GDP by the end of this year.  The country needs to repay $3.5 billion in loans and bonds next year, according to data compiled by Bloomberg, a little more than it is asking for from the IMF.

The IMF had by the end of October already disbursed a record $142.5 billion to member nations this year. That is almost double the overall outstanding balance at the end of 2019, just before the pandemic, according to IMF data.

“We have 25% of emerging markets in debt distress,” she added. “They need support.”

Fear of contagion remains low. “A lot of the problems that we see tend to be quite confined to the country,” said Jason Tuvey, senior emerging markets economist at Capital Economics. “It doesn't cause a huge spillover to the rest of the world.”

Ghana, a regular client of the IMF — this is its 17th request to the fund — has often failed to meet targets set in previous programs, including the last one, which ended in 2019 with a waiver from the fund, essentially rubber stamping its lack of progress. The government’s decision to aggressively tap eurobond markets in 2020, so soon after that program ended, spooked investors and led the agencies to revisit their ratings.

“That triggered alarm bells,” said Simons, “like, ‘what is going on with this country?’” A government plan to slash expenditure by 20% did little to assuage the market.

Imani estimates that 1.4 million Ghanaians are directly exposed to government securities in part via insurance assets and pension funds — a politically volatile situation now that the government is restructuring its  domestic debt to qualify for IMF support. The proposed deal has been condemned by the country’s pension trustees who said it would  “destroy the savings of Ghanaians and further undermine market confidence.” Fitch estimates Ghana's debt service payments will be $3 billion in 2023, including amortization and interest.

Back in central Accra, Priscilla Akologo points at the gaping hole in the ground that might one day hold a $400 million church. The site once housed government buildings, since demolished, that for the past two decades provided customers for her roadside food stall. But between the lack of office workers and a quadrupling of cooking oil prices, her business selling fried fish and cornmeal dumplings known as kenkey has been crippled.

“We are all in a total mess with no sign of hope,” she says. “Prices are rising by the day and basic necessities like food and water are becoming too expensive to afford.”