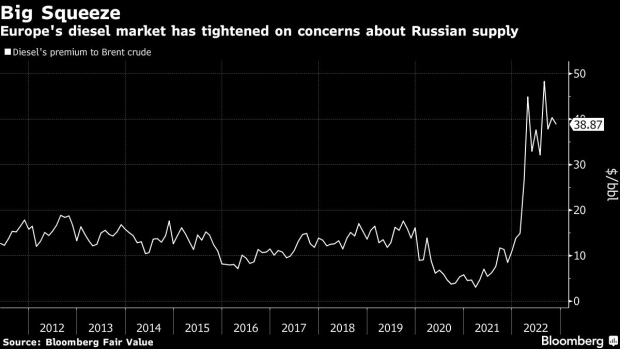 A storage container stands at an oil refinery, operated by BP Plc, at the Port of Rotterdam in Rotterdam, Netherlands, on Monday, April 24, 2017. Oil dropped below $50 a barrel in London for the first time since late March on growing signs that OPEC's production cuts are failing to clear a surplus of crude. Photographer: Simon Dawson/Bloomberg , Bloomberg

(Bloomberg) -- Dutch unions started a partial strike at BP Plc’s refinery in Rotterdam, with workers now limiting their efforts to resolving the fault that brought fuels production to a total standstill last week.

BP employees won’t cooperate on restarting production units after the fault has been fixed, a representative for the CNV Vakmensen union told Bloomberg by phone. BP has said it was planning to restart the refinery early this week and didn’t immediately respond to an email Tuesday asking about the strike.

BP’s Rotterdam refinery is among the biggest in Europe and is located in the heart of the region’s main oil-trading hub. It suffered an uncontrolled outage last week on the supply of steam, which the plant needs to operate.

Refinery outages are closely watched currently after a wave of strike action in France this autumn prompted severe tightening in the diesel market. Russian supply is also a key concern.

BP employees had started work-to-rule action at the beginning of last week but called it off following the incident. The unions previously gave a deadline of Nov. 23 for resolving a pay dispute with BP.

Part of the refinery, BP’s biggest in the region, had been undergoing planned maintenance since September and the restart of at least one of those units also hadn’t gone to plan earlier this month.

--With assistance from Rachel Graham.