Can I collect CERB if I ask to be laid off?

A report due Friday will likely show employment in Canada was decimated in April as a nationwide lockdown caused mass lay-offs.

The country probably lost more than 4 million jobs, a fifth of the labor force and far and away the largest decrease in monthly employment on record, according to a Bloomberg survey of economists. That follows the record 1-million decline in March, when the Canadian economy was essentially shut down to prevent the spread of the coronavirus.

April is the first full month that strict social distancing measures and the closing of non essential business were in effect. Several provinces in Canada are starting to slowly reopen, which may allow workers to get rehired in May and beyond.

Of the 18 economists surveyed, 12 predicted a drop of 4 million or more. Estimates ranged between 1.2 million to 5.5 million, with the median forecast at 4.3 million lost jobs. Economists expect the unemployment rate to hit about 18%, more than double the 7.8% rate in March.

The Canadian government has softened the blow by introducing an emergency wage benefit to cover workers who have lost work as the nation aims to halt the spread of the virus. A total of 6.7 million people had applied for compensation as of April 19, a day after Statistics Canada had completed its survey. 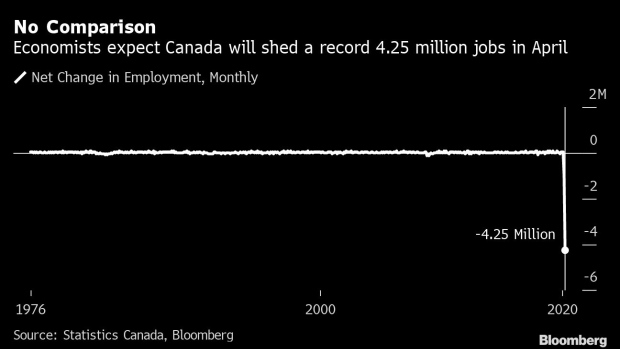 It’s a different picture this time around for the composition of the job losses. In previous Canadian recessions, it was men and those employed in manufacturing and construction who bore the brunt of the downturn. This time, it’s part-time workers and women who have been most affected, the March data show.

Job posting data suggest the labor market carnage may be hitting a plateau. While postings have been down significantly on a year-over-year basis, they started to level off toward the end of April, figures from Indeed Canada show. The services sector has been hardest hit particularly within tourism, education and food services.

Labor market destruction isn’t unique to Canada. In the U.S., the median forecast of economists calls for an eye-popping 21 million plunge in payrolls, the most in records back to 1939.