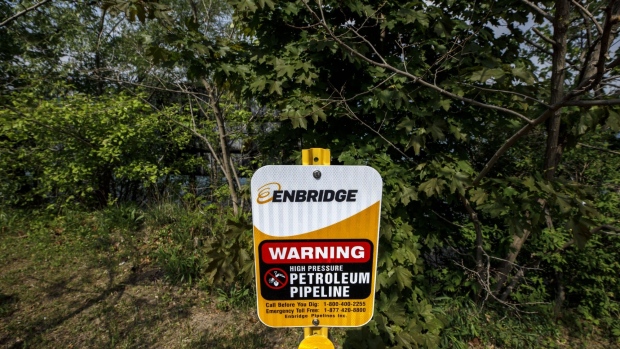 Signage for an underground Enbridge pipeline in Sarnia, Ontario, Canada, on Tuesday, May 25, 2021. Enbridge Inc. said it will continue to ship crude through its Line 5 pipeline that crosses the Great Lakes, despite Michigan Governor Gretchen Whitmer's order to shut the conduit. Photographer: Cole Burston/Bloomberg , Bloomberg

(Bloomberg) -- A taxpayer backstop is a key piece of the financing for Enbridge Inc.’s C$1.12 billion ($820 million) sale of a pipelines stake to a group of indigenous communities.

Athabasca Indigenous Midstream LP raised C$865.2 million in the bond markets on Tuesday while the remainder is being funded with a C$250 million equity loan guaranteed by the Alberta Indigenous Opportunities Corporation, or AIOC, a provincial government agency.

As an industry, “we’ve got the assets, we can help create the structure, in this case we helped with the financing, but there is a big role for the government to play,” said Max Chan, senior vice president of corporate development at Enbridge. AIOC’s involvement is “a guarantee for the equity piece essentially so I think it’s a nice elegant solution. It’s not cash, but they are providing basically, the balance sheet, the credit worthiness of government.”

A group of 23 First Nation and Métis communities are taking an 11.57% stake in seven Enbridge-operated pipelines in the Athabasca region of northern Alberta, in what the Calgary-based company said is the largest energy-related indigenous economic partnership transaction in North America to date.

“The AIOC is sort of a necessary ingredient in this,” said Chan. “What I’m hoping, if you look at replicability, is that other provincial governments and the federal governments take a look at what’s been done here.”

Athabasca Indigenous Midstream, a vehicle created to fund the transaction, raised cash by selling bonds with an expected average life of around 12.2 years, according to terms sent to potential buyers of the deal. It was the largest corporate or structured bond deal priced in Canadian dollars in the last three weeks. A group of 25 institutional investors -- including life insurance companies and asset managers -- took part in the transaction, said Chan.

The deal was priced Tuesday just as all-in yields in the Canadian dollar corporate bond index touched the highest level since 2009, according to Bloomberg data.

“The market is in the kind of ‘don’t-come-if-you-don’t-have-to,’ but in this case we got a great reception,” said Chan, who until recently was Enbridge’s treasurer. “I take a lot of pride in that, there’s not a lot of companies, not a lot of issues that actually clear the market today, regardless of the price.”