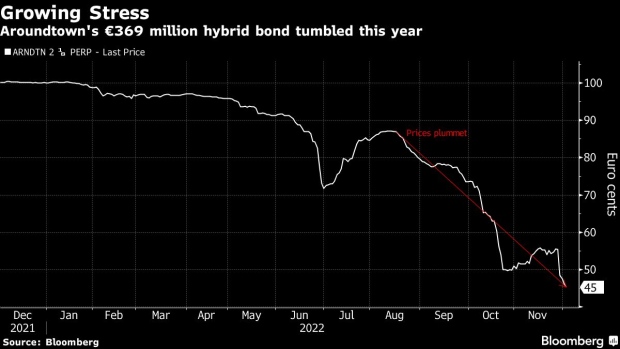 (Bloomberg) -- The sudden end to the cheap money era is drawing fresh scrutiny to how European landlords account for their debt loads.

At issue is more than $21 billion of hybrid bonds that are treated as equity, not debt, under international accounting rules. The debate around those securities intensified last week after one of Europe’s largest landlords, Aroundtown SA, didn’t exercise a redemption option on one of its hybrids and said it will review whether to defer coupon payments.

The decision caused a broad sell off in real estate hybrid bonds and brought renewed focus to a change in recommended landlord accounting metrics earlier this year. The European Public Real Estate Association changed its guidance in March, suggesting landlords include them as debt in loan-to-value ratios, a key financial metric. With the change, rating agencies, accountancy rules and the industry’s main body — representing both landlords and shareholders — now treat hybrid debt differently from each other.

Borrowers have issued the securities at breakneck speed in recent years and landlords would see a sudden jump in their relative indebtedness if they follow the recommendation. Landlords including Aroundtown and Samhallsbyggnadsbolaget i Norden AB, known as SBB, have found themselves in the crosshairs of critics questioning how they account for their debt. And now short sellers are starting to move in.

“There has always been in real estate an eternal debate about what you do with hybrids,” said Harm Meijer, founding partner of real estate private equity firm Icamap Advisory Sarl. “It is really something that has come from loose monetary policy. In a bull market nobody cares, in a bear market it matters.”

The change in recommended best practices were published just as a rapid shift in monetary policy across the continent brought an end to the 10-year bull market for European real estate. Property valuations have begun to fall and a growing list of publicly traded landlords are attempting to offload property to avoid having to refinance their borrowings at much higher rates or to bring down their levels of indebtedness.

Aroundtown, which is one of Germany’s biggest real estate issuers and backed by Israeli investor Yakir Gabay, has been criticized by some for reporting a low LTV ratio because it doesn’t include hybrids in its calculations.

“Aroundtown reported an artificially low LTV ratio of 40%,” Ash Nadershahi, senior analyst at Creditsights said in a note to clients late last month. “This is because the company does not include hybrids in their calculations, adds in cash from yet-to-be completed asset sales and, in our view, applies generous assumptions to its property valuations.” He placed a sell recommendation on Aroundtown’s hybrids.

Under the new guidance, Aroundtown’s EPRA LTV would be 55% as of June, a spokesman said in an email. The metric was included in a company presentation to investors published Nov. 24.

The company, however, is defending its accounting practices.

“We see hybrid notes, especially in the current market condition, as an equity instrument as they do not have any default covenants, no maturities, are subordinated to debt, and the principle and coupon payments can be deferred perpetually,” Aroundtown said in a statement in response to questions from Bloomberg News about their accounting treatment. “For the purpose of bond covenants, the perpetual notes are considered as 100% equity. Thus, in times of financial distress these instruments provide an additional security.”

Aroundtown fell 2.2% Tuesday, the most in the Stoxx Europe 600 Real Estate index.

SBB, for its part, has lost almost 70% of its value this year after short seller Viceroy Research said the company was massaging its LTV ratio by issuing hybrids, among other allegations.

EPRA changed its guidelines in March after extensive debate to “respond to a need voiced by investors, analysts and property companies,” according to a press release issued at the time. To be sure, credit rating agencies haven’t changed the way they view hybrids, typically counting 50% of their amount as equity when calculating their credit ratings.

With property values falling, scrutiny of landlords’ relative indebtedness is intensifying, transforming the debate about how hybrids should be accounted for from an esoteric accountancy issue into a potential red flag for investors.

“LTV has been a metric that’s been heavily relied upon by investors when analyzing real estate firms, but it’s also one that can easily be manipulated,” Creditsights’s Nadershahi said in an interview about the sector. “Its not something that’s been thoroughly scrutinized until this year, but with the increasing risks skewed to the downside in the European property sector, investors have to conduct their own due diligence away from the company-reported number.”