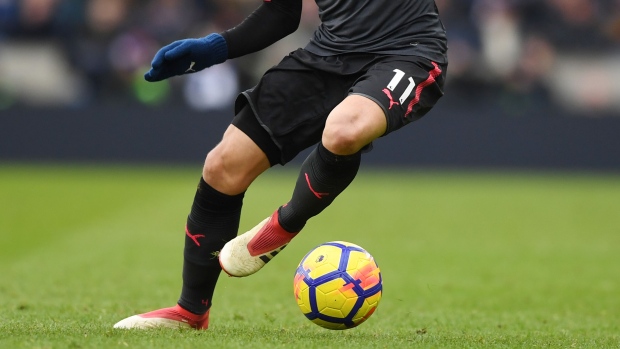 EDITORS NOTE: EDITORIAL USE ONLY. NO SYNDICATION, NO MEDIA SOURCE. FOR USE ON ALL BLOOMBERG PLATFORMS. Mezut Ozil, a Arsenal FC football player, wears the official club kit from Puma SE and soccer boots from Adidas AG, whilst running with the official Nike Inc. Ordem V soccer ball during the English Premier League match against Brighton and Hove Albion FC at Falmer Stadium, in Brighton, U.K., on Sunday, March 4, 2018. Photographer: Simon Dael/Bloomberg , Bloomberg

(Bloomberg) -- English football requires an independent regulator to tackle the threat of an “existential crisis in the years to come” due to financial pressures in the sport, a review commissioned by the U.K. government found.

“The dangers facing many clubs across the country are very real, with their futures precarious and dependent in most cases on the willingness and continuing ability of owners to fund significant losses,” Conservative member of Parliament Tracey Crouch said in a letter to the government on Thursday.

The risks facing the sport are evidence that its current management structure is not working, with no single authority and a “lack of coordination,” Crouch wrote to Culture Secretary Oliver Dowden. An independent regulator could impose cost controls, financial regulation and “real time” monitoring, she said.

Boris Johnson’s government set up the “independent fan-led review” of soccer governance in April, amid the fallout over an attempt by some of England’s richest clubs to join a breakaway European Super League. The aborted plan “jeopardized the future of the English football pyramid,” Crouch said.

Crouch said there is a “strong case for reform” across England’s soccer structures, including the top-tier Premier League and at the Football Association, which governs the national team as well as grassroots soccer. The panel’s final recommendations are due in the fall.