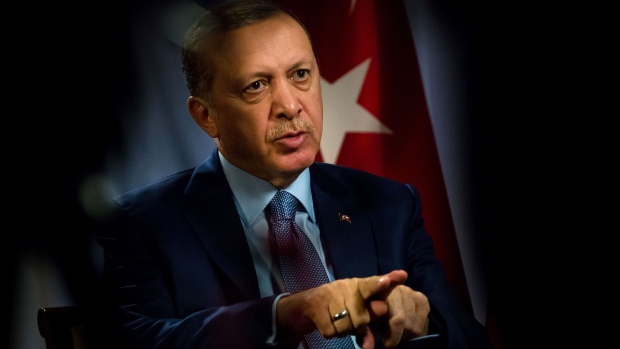 (Bloomberg) -- Turkish President Recep Tayyip Erdogan said Monday his government would step up its campaign against Kurdish politicians following a botched rescue operation that resulted in the deaths of 13 hostages.

The government says the captives were executed by the outlawed Kurdistan Workers’ Party or PKK. Erdogan has ordered an expanded crackdown on the group, which has battled for autonomy in southeast Turkey for nearly four decades and is considered a terrorist organization by the U.S. and European Union.

At the same time, his government has pressed charges against Kurdish lawmakers for allegedly conducting outlawed separatist activities. Erdogan’s nationalist allies have demanded that Turkey’s main Kurdish political party be shut down entirely, raising concerns among human rights groups over the erosion of democracy and threatening to fuel domestic tensions. Kurdish parliamentarians deny links to the PKK but say the group is a product of Turkey’s refusal to grant more cultural rights to the country’s minority Kurds.

“We will continue to appoint trustees today and tomorrow to the places where production is halted, where the money given by the state is transferred to Qandil and where there is no service,” Erdogan said, referring to the ousting of elected Kurdish mayors from about 100 municipalities in the country’s Kurdish-majority southeast on charges of supporting the PKK, which is based in Mount Qandil in neighboring Iraq.

He was addressing members of his ruling AK Party in the southeastern city of Hakkari, where the mayor was replaced by a government-appointed official or “trustee” during an earlier crackdown. Erdogan’s speech came hours after authorities declared a curfew in parts of nearby Mardin province as part of a sweep against suspected PKK militants.

The Turkish government has invoked the killing of the hostages to renew its criticism of Washington’s arming of a Kurdish group in Syria, which was a dominant force in the U.S.-led campaign to defeat Islamic State. That support has added to tensions between Turkey and the U.S. over several foreign policy issues including Erdogan’s purchase of a Russian-made air defense system.