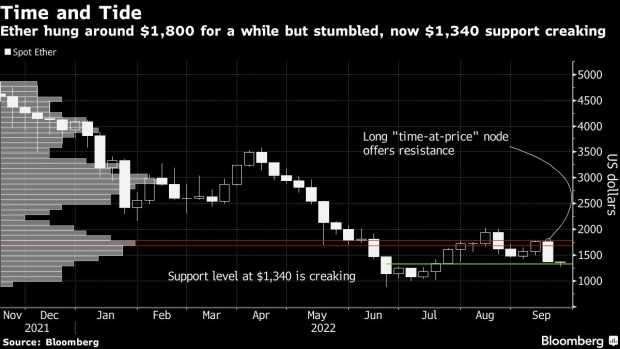 A bitcoin trading chart in the window of a cryptocurrency exchange kiosk in Istanbul, Turkey, on Monday, Nov. 8, 2021. Bitcoin and Ether hit all-time highs in a cryptocurrency rally that some analysts attributed partly to the search for a hedge against inflation. Photographer: Moe Zoyari/Bloomberg , Bloomberg

(Bloomberg) -- The fanfare over a revamp of the Ethereum blockchain is still echoing across the cryptoverse but that’s doing little to stem a slide in Ether.

The network’s native token is down 10% since the most commercially important digital ledger last week implemented an upgrade to slash energy use.

The second-largest virtual coin had rallied from mid-June on hype around the software update known as the Merge, but that’s fizzling now the shift is done. It’s down some 63% this year, a bruising period for cryptocurrencies.

Crypto and many other assets are also quivering ahead of what’s likely to be another big Federal Reserve interest-rate hike on Wednesday.

The selloff in Ether is bringing technical patterns into play that hint at more downside risk. Digital-token prices were little changed on Tuesday, with Ether around $1,350 and Bitcoin just above $19,000 as of 1:10 p.m. in Tokyo.

Ether has dropped below the second standard deviation of a regression channel drawn from its June lows. The study suggests that this brings a retreat to the third standard deviation -- a level of about $1,250 -- into play. If that support fails, the next marker is $1,000.

The price of Ether of late clustered around $1,800 for a notable period of time, indicated by the horizontal bars below, which capture how much time the token spent at particular levels. That, in effect, became a ceiling it struggled to break, and it has since dropped below a zone of support around $1,340. For technical analysts, the breach of support raises the risk of more falls.

Options data from Deribit show a high number of outstanding Ether put and call contracts -- so-called open interest -- at strikes of $1,000 and $2,000 respectively for end-September expiry. That suggests those levels define a trading range for Ether.

Meanwhile, bulls looking for a glimmer of hope might take solace from the so-called maximum pain point implied by the options bets.

This is part of a controversial theory that says options writers -- often financial professionals -- make more money than options buyers. The argument is that an asset’s price will move toward the level where options writers make the most profit -- that is, where the greatest number of options expire as worthless for buyers. Deribit data puts this maximum pain point around $1,600.