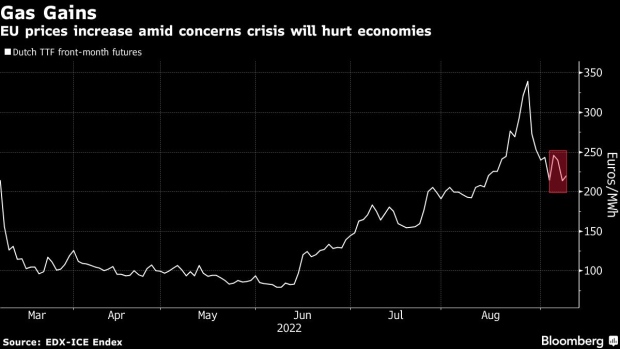 A glowing neon hotel sign as apartment lights remain off in residential buildings at night in Paris, France, on Thursday, July 28, 2022. Although economic expansion in France beat expectations by a distance, the European energy crisis is pushing up the cost of electricity in the wholesale market for the whole of Europe, with French forward prices surging to almost 1,000% more than their decade-long average through 2020. Photographer: Benjamin Girette/Bloomberg , Bloomberg

(Bloomberg) -- The European Union is throwing together a series of radical plans to tame runaway energy prices and keep the lights on across the continent, but governments across the region are going to need to find common ground and fast.

As the bloc’s energy ministers meet in Brussels on Friday, they are seeking to take the first political steps on ways to prevent Russian President Vladimir Putin’s cutoff of gas supplies from unleashing rationing, blackouts or even social unrest. But as they try to stick together, governments also need to make sure their emergency intervention doesn’t accidentally cause chaos in the energy markets and make things even worse.

The challenge is to find solutions that can be applied across the region and still fit each of the 27 member states economies and national power systems, which are fed by varying energy sources.

Czech Industry Minister Jozef Sikela said Friday that “there’s no time to lose” in reaching an agreement. “I expect the proposal in a few days and I want to have clarity at the end of the month,” he told reporters. “I already see points where I’m pretty sure we will align.”

Before the emergency meeting in Brussels, diplomats were converging on some general themes -- the need to break the dependency of power prices on gas and to help boost liquidity in the energy sector -- but remain deeply split over what exactly should be done and how. An agreement is expected to take several weeks at least.

Europe may not be able to wait long.

“This is not the moment to have principal debates on energy markets. We just need solutions right now,” said Marco Mensink, director general of the European chemical industry association Cefic. “The situation is very alarming -- this is about the future of industry in Europe. Companies are shutting production down as we speak, and with these prices, they will not reopen.”

Why Europe Wants to Change the Way Power Gets Priced: QuickTake

“A few weeks like this and the European economy will just go into a full stop. Recovering from that is going to be much more complicated than intervening in gas markets today,” he said Thursday in an interview with Bloomberg News. “The risk of that is de-industrialization and severe risk of fundamental social unrest.”

Speed has never been the EU’s strength. Even fast-tracked measures take at least a couple of rounds of negotiations between government representatives before they are approved by ministers, translated into the bloc’s 24 languages and published.

And the bloc is just at the very early stages of devising plans. Detailed measures to limit the impact of the energy crisis have yet to be unveiled. Most will come after European Commission President Ursula von der Leyen holds her annual address to the European Parliament on Sept. 14 in Strasbourg, France.

Finnish Prime Minister Sanna Marin told the parliament on Thursday that an agreement on the emergency intervention plan will also need involvement by heads of government. EU leaders are scheduled to gather for an informal meeting in Prague on Oct. 6-7, with another summit scheduled in Brussels on Oct. 20-21.

Friday’s meeting of energy ministers will be the first chance for EU member nations to assess just how far apart they are on the biggest challenges.

“Talks will not be easy,” Romanian Energy Minister Virgil Popescu told Bloomberg. “We have our own proposals and we’ll put them on the table and discuss. The commission’s proposals are a good start, but we need to see where the other member states stand.”

Von der Leyen said earlier this week that the commission will lay out a set of radical interventions in the energy market, including for a levy on fossil-fuel producers -- based on pre-tax profit -- and a limit on excess revenues of companies producing power from sources other than gas. The idea is to rechannel profits to support consumers. But those may be difficult ideas for countries to reach a quick agreement.

One step that may be able to come together faster is a proposal to ease the mounting stress in energy markets caused by surging collateral requirements, with utilities facing unsustainable margin calls.

The EU is also planning to discuss the idea of mandatory targets for reducing energy use.

There are some early warning signs of how much Europe will struggle to make painful choices to reach bloc-wide agreements. German Economy Minister Robert Habeck complained that neighboring Belgium, Luxembourg, the Netherlands and Poland refuse to engage in “constructive negotiations” about more gas solidarity agreements.

That could exacerbate the gas crunch in Germany “because a substantial building bloc of the EU’s gas crisis resilience in the form of bilateral agreements would not be available,” Habeck said in a report seen by Bloomberg that he presented to the Bundestag’s energy and climate committee late Wednesday in Berlin.

German Anger Spills Over as Countries Balk at Gas-Sharing Deals

Despite these kinds of challenges, leaders are increasingly recognizing that failure to act may prompt social upheaval and endanger their governments.

The average annual energy bill is already more than a month’s wages for low-paid workers in the majority of EU nations, the European Trade Union Confederation said earlier this week.

“I think we don’t have the space to again say, ok, we put something in the text and then we meet each other in two months,” De Croo said. “In two months, with these prices, I fear it’s too late.”