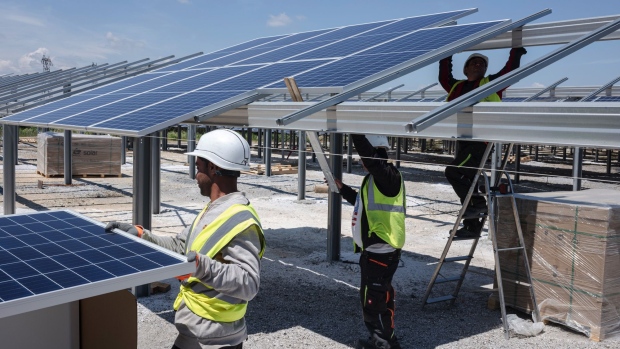 (Bloomberg) -- European Union governments are poised for a fight over the the size of a fund designed to cushion some consumers from costs in a new carbon market, with France to propose limiting its size as part of a deal on an ambitious climate plan for 2030.

France, the current holder of the rotating EU presidency, aims for an agreement on Tuesday among national governments on how to enact the 55% emissions-reduction target for this decade.

France suggested a new emissions program for buildings and transport be delayed by one year and a fund to alleviate the impact of the new market be cut to 59 billion euros ($62 billion) from 72 billion euros proposed by the European Commission, according to EU diplomats with knowledge of preparatory talks before the June 28 ministerial meeting.

The proposal reflects calls by countries including Germany, Sweden, Denmark and the Netherlands who want to further limit the size of the Social Climate Fund, said the diplomats, who asked not to be identified as the discussions were private.

The Social Climate Fund is the flagship element of the so-called Fit for 55 package, which is designed to make every corner of the economy more sustainable over the next eight years and pave the way for climate neutrality by 2050. Financed from auctions of carbon permits in the new emissions trading system, it’s aimed at mitigating the costs for the most vulnerable consumers, smallest businesses and transport users.

The deal drafted by France would postpone the start of the carbon market for buildings and transport to 2027 and allocates money for the climate fund for the 2027-2032 period, compared with 2025-2032 proposed by the commission. Spending could start in 2026.

An agreement among ministers on Tuesday would define member states’ negotiating stance for further talks with the EU Parliament and the European Commission on the final shape of the package.

It would also put member states at odds with the parliament, which earlier this month agreed to keep the climate fund while scaling down the plan for the new carbon market, often called Emissions Trading System 2, to avoid the risk of repeating the yellow vests protests that shook France three years ago.

The protests started after French President Emmanuel Macron moved to increase taxes on fossil fuels to promote a switch to greener alternatives.