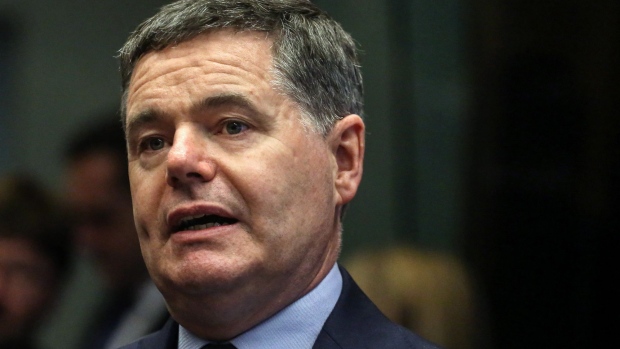 Paschal Donohoe, Ireland's finance minister, at a Eurogroup meeting at the European Convention Center in Luxembourg, on Monday, Oct. 3, 2022. EU Finance ministers are meeting to discuss how to act in a coordinated way to shelter firms and households from surging energy prices and avoid the risk of fragmentation within the euro area. , Bloomberg

(Bloomberg) -- The embattled global tax agreement, struck with much fanfare in Rome last year, received some much-needed support during high-level international meetings in Washington this week.

Ireland’s Finance Minister Paschal Donohoe, who runs the meetings of finance ministers in Europe’s common currency area, said the European Union shouldn’t wait for the US Congress to move forward in approving the deal before implementing a global minimum tax -- a major component of the agreement. An EU directive on that has been held up in recent months by Hungary, which opposes raising its taxes to meet the 15% minimum.

“What we need to do in Europe, as opposed to folks in other parts of the world, we need to play our part now and reach an agreement on the implementation,” Donohoe said in an interview with Bloomberg News. “We now are nearly there in reaching unanimity.”

During a meeting with US Treasury Secretary Janet Yellen, the European Union’s economy commissioner, Paolo Gentiloni, acknowledged the EU and US each still had work to do in implementing the deal. But he then pledged to “never give up” seeking to bring to life what he called a “historical agreement.”

Separately, Indonesia’s finance minister, Sri Mulyani Indrawati, emerged from a gathering of finance chiefs from the Group of 20 nations to declare they remained committed to the deal. Indonesia holds the rotating presidency of the G-20 this year.

She said progress on the deal was “slightly delayed,” but added, “we also reaffirm our commitment to the implementation of the international tax package. This is very important.”

Almost 140 countries last year backed a plan to revamp the way multinational companies are taxed. It seeks to stop the flight of companies to low-tax havens by imposing a minimum 15% tax on profits, and would reallocate some of the taxes imposed on the largest multinational firms based on where they generate revenue, instead of where they book profits.

Yet the much-celebrated deal has failed to receive necessary approvals from EU member countries -- where unanimity is required -- and from the US Congress. The delays have threatened to kill the agreement before it even comes into force.

Global leaders have come to Washington this week for a range of gatherings, including the annual meetings of the International Monetary Fund and World Bank.