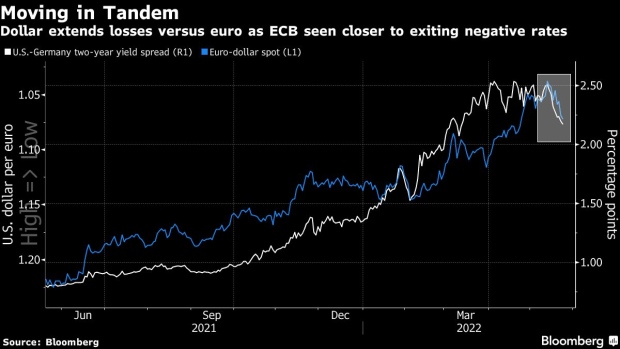 Christine Lagarde, president of the European Central Bank (ECB), during a Bloomberg Television interview on day two of the World Economic Forum (WEF) in Davos, Switzerland, on Tuesday, May 24, 2022. The annual Davos gathering of political leaders, top executives and celebrities runs from May 22 to 26. , Bloomberg

(Bloomberg) -- The euro extended a rebound from a five-year low as the European Central Bank made it clear that it sees the end of negative monetary policy.

That will help narrow the interest-rate differential with the Federal Reserve, which has moved more quickly to raise rates and keep inflation under control. The spread between two-year German and US bond yields shrank to 217 basis points, its narrowest since early March.

ECB President Christine Lagarde said on Tuesday that the euro zone would be out of negative rates before the end of the third quarter, reiterating similar comments made yesterday. Speaking to Bloomberg TV on the sidelines of the World Economic Forum in Davos, Switzerland, she added that unemployment rates and high household savings suggest that Europe is avoiding a recession.

“It is important that the ECB has been clear that they will remove negative rates quickly,” said Lee Hardman, a foreign exchange strategist at MUFG. He added that Lagarde “wouldn’t be so clear unless there was already broad agreement.”

The euro climbed 0.2% to $1.0733, hitting its highest since late April. The single currency rallied broadly, reaching session highs against the Swiss franc, sterling and the yen.

“The hawkish pivot from the ECB is helping to provide more support for the EUR in the near-term,” said Hardman.

Yields on two-year German notes, which are more sensitive to rate hikes than longer-dated debt, outperformed equivalent Treasuries. The yield fell three basis points to 0.39% after briefly touching the highest level since 2011.

Money market bets on rate hikes were little changed, with 34 basis points of ECB tightening priced for July and 111 basis points by year-end.