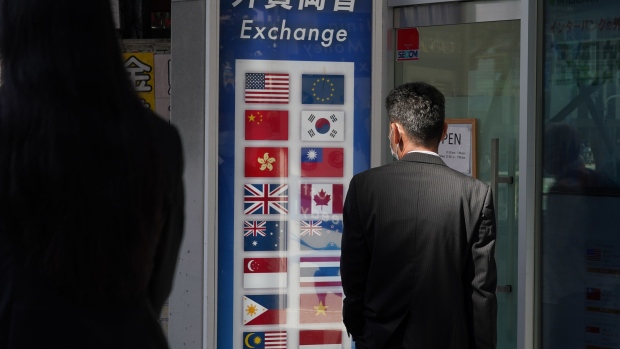 A customer outside the Ninja Money Exchange, operated by Interbank HD, in the Shinjuku district of Tokyo, Japan, on Thursday, June 9, 2022. Caught in the crossfire between the two wildly different monetary policy regimes in Tokyo and Washington, at one point Tuesday, the Japanese currency was less than one yen away from its 2002 high of 135.15 per dollar. Photographer: Toru Hanai/Bloomberg , Bloomberg

(Bloomberg) -- The euro sank to a 20-year low against the US dollar as investors pared bets on European Central Bank interest-rate hikes given the growing risk of a recession in the region.

The single currency fell as much as 0.9% to 1.0331, its weakest level since December 2002. Money markets trimmed ECB tightening bets to less than 140 basis points this year after French services PMI was revised lower Tuesday. That’s down from more than 190 basis points almost three weeks ago, widening the interest-rate differential with the Federal Reserve.

The euro has dropped more than 8% against the dollar this year as record inflation has escalated the squeeze on households and firms, and along with the fallout from war in Ukraine, has hampered the ECB’s ability to raise rates as fast as the Fed.

The losses Tuesday were compounded by poor liquidity and selling in euro-Swiss franc, according to three-Europe based traders.