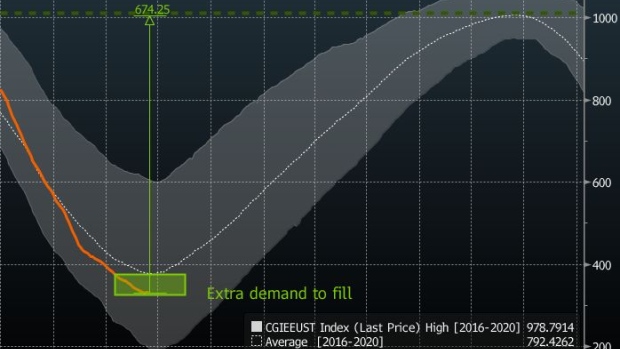 A gas storage tank stands the construction site of the Trans Adriatic Pipeline receiving terminal in Melendugno, Italy, on Tuesday, May 22, 2018. The Trans-Adriatic Pipeline, known as TAP, is a a 4.5 billion-euro ($5.2 billion) natural gas pipeline that will bring gas from Azerbaijan, winding through Greece and Albania, under the Adriatic Sea and finally up into Italy, which imports more than 90 percent of its oil and gas. , Bloomberg

(Bloomberg) -- A widening natural gas storage gap in Europe is capturing the attention of traders, who expect the world’s biggest exporters to begin jostling to refill fuel depots depleted by the continent’s harsh winter.

Gas storage is critical for blunting spikes in demand and smoothing price volatility during extreme weather and disruptions to supply. Europe’s cold winter left facilities about 25 billion cubic meters below last year’s levels -- a volume of fuel equivalent to nearly third of annual consumption in Germany, the region’s biggest user.

“The trend is clear,” according Niek van Kouteren, a senior trader at Dutch energy company PZEM NV. Suppliers from Moscow to Houston “will have room to take advantage of the momentum,” he said.

Booming summer demand will support shipments from Russia, Norway, Qatar and the U.S. Almost 60% more gas than last year will be needed to refill inventories after cooler March weather across Europe kept demand elevated. Filling the storage gap before next heating season is expected to benefit both pipeline exporters like Gazprom PJSC, as well as liquefied natural gas players such as Texas-based Cheniere Energy Inc.

Storage demand this summer will be about 65-70 billion cubic meters, said Sergei Kapitonov, a gas analyst at Moscow’s Skolkovo Energy Center. Should temperatures remain below normal through early April the gap could increase.

Gazprom’s willingness to book extra capacity through Ukraine could determine whether it achieves record exports. The decision will unfold amid a tense territorial standoff with its neighbor and work on the last stages of the embattled Nord Stream 2 pipeline directly linking Russia to Germany.

“This year Gazprom’s exports will be limited by the willingness of the company to book additional capacity via Ukraine and by the competition with LNG,” Kapitonov said.

The pace and price of replenishing Europe’s storage will partly hinge on Asia. The world’s biggest LNG consumer demonstrated during a wild rally in January how its markets can divert tanker-borne fuel from Europe amid tightness. Asian LNG demand in summer typically increases with the use of the fuel for cooling, which is less prominent in Europe.

“What we don’t know is how LNG will play with all that,” he said. “U.S. LNG could become the baseload for summer in Europe. There is a question mark on how Asian LNG demand will respond, but LNG supplies could increase in Europe during summer, more than compensating for the stronger demand.”

Carbon prices have increased, making gas more attractive than coal. Plus, the commodities industry is bullish, a reversal to last summer when markets were largely paralyzed by the Covid-19 pandemic, according to Peter Abdo, chief commercial officer for LNG and global origination at Germany utility Uniper SE.

“We experienced a lot of negative sentiment last year from Covid, but that sentiment has been lifted this year,” Abdo said in an interview. “We see pretty healthy prices even going into the summer.”