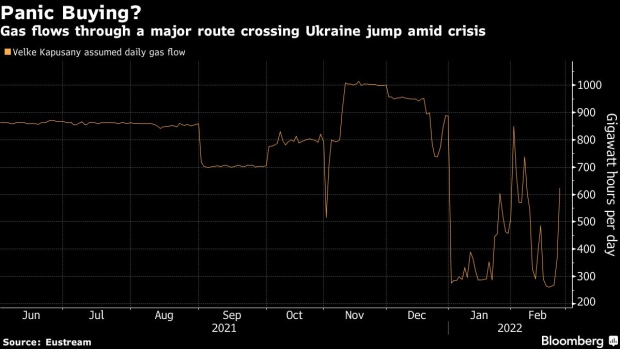 Utilities are ordering more of the fuel under long-term contracts with Gazprom PJSC after prices rallied more than 60% on Thursday, when Russia began a full-scale invasion. That’s because the deals are priced in such a way that Russia imports are now cheaper than spot gas traded at European hubs.

Russia launched a barrage of missile attacks on Ukraine early Thursday, triggering the worst security crisis Europe has witnessed in decades. Ukraine said Russian forces have entered the Kyiv region near the border with Belarus, and separatists have begun assaults in the eastern part of the country. Energy prices rallied, with European natural gas surging by a record 62%.

Current gas prices are “well above the likely sales price for many Gazprom import contracts and so driving purchases higher,” said Stefan Ulrich, a gas analyst with BloombergNEF. “There may also be a strategic component as buyers seek to buy now given a potential for disruption in flows or further price increases.”

Russian gas exports through Ukraine jumped almost 38% on Thursday and may increase even further, according to data from Ukraine’s grid operator. Traders booked an additional 6.5 million cubic meters a day of pipeline space to flow Russian gas into Europe through the Velke Kapusany enrty point on the border between Ukraine and Slovakia, a sign shipments will increase again on Friday.

Europe is facing an energy crunch as demand rebounded just as Gazprom curbed supplies, limiting sales in the spot market. The Russian gas giant also failed to fill its storage sites in the Europe before the winter, leaving the continent grappling with the lowest stockpiles in at least a decade for most of the heating season.

The increase in purchases comes at an awkward time for Europe. The EU, the U.K. and the U.S. have all condemned Russia’s actions, but sanctions so far have mostly steered clear of energy and transactions in foreign currency, both of which could upend commodity markets and leave Europe exposed to blackouts this winter.

“I think gas will continue to flow to Europe via all export corridors, including the Ukrainian one” as long as no pipelines get damaged, said Katja Yafimava, a senior research fellow at the Oxford Institute for Energy Studies.