European soccer is embroiled in an escalating multi-billion-euro battle for control of the continent’s most prestigious club competition after a dozen teams declared themselves founding members of a breakaway league.

The announcement of the 4 billion-euro (US$4.8 billion) defection financed by JPMorgan Chase & Co. prompted an outcry from fans, governments and UEFA, European soccer’s governing body. In response, UEFA is now exploring a 6 billion-euro financing proposal from U.K.-based asset manager Centricus to fund a revamped Champions League, people familiar with the matter said.

The confrontation reflects the evolution of the world’s most popular game as a global business, yet also the financial realities during the pandemic. Led by clubs from England, Italy and Spain, teams with vast fanbases and significant debts are seeking to squeeze more cash from broadcasting rights and underpin revenue after a year spent playing in empty stadiums.

Of the teams that have so far joined the JPMorgan-backed Super League, all but a few ended last season in the red and at least eight have net debt exceeding 100 million euros, according to accountancy firm KPMG. 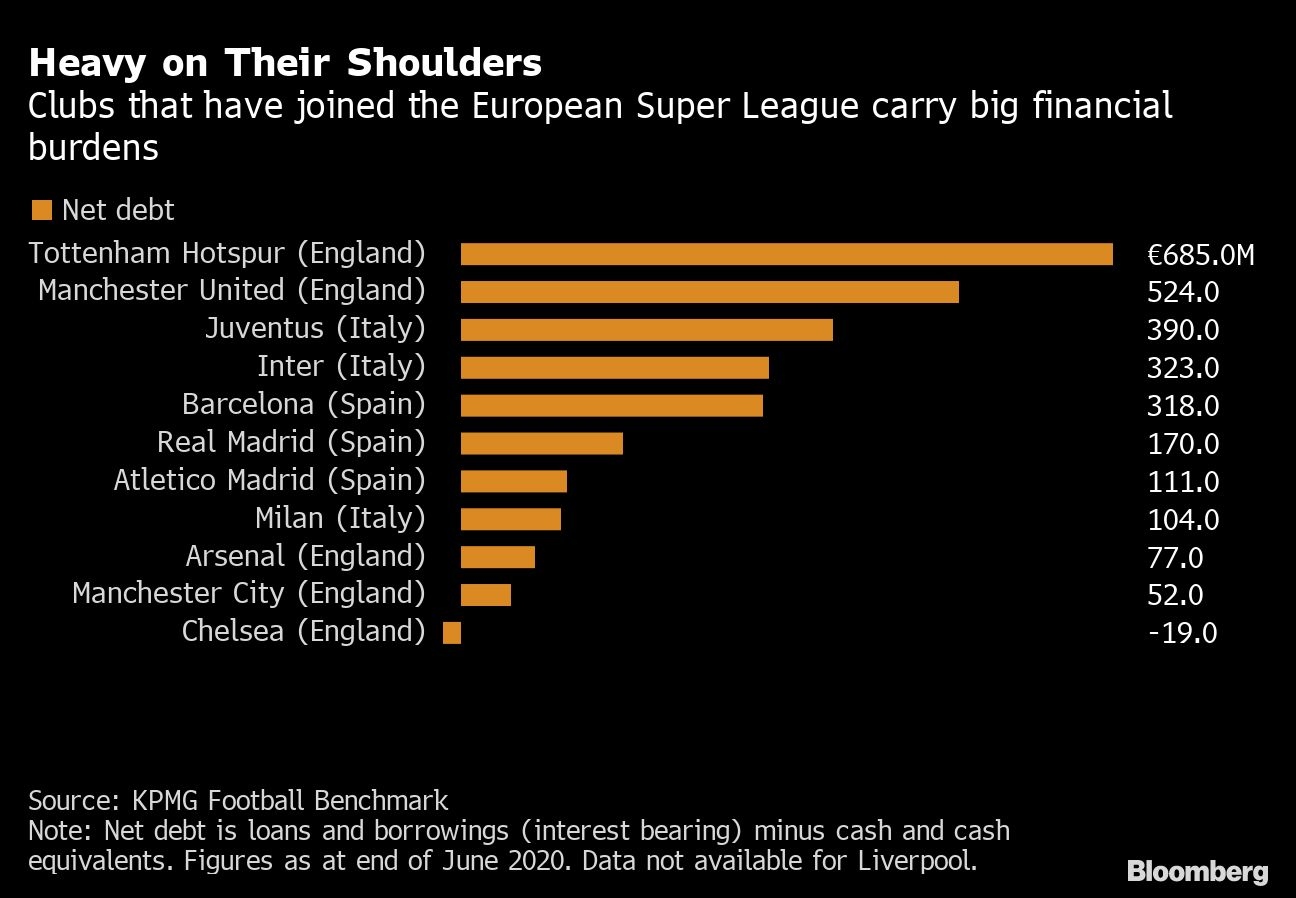 What comes next is likely to be some high-stakes brinkmanship. UEFA President Aleksander Ceferin branded the breakaway proposal a “spit in the face” for soccer supporters, while his organization vowed to take all measures necessary—from turning to the courts to banning teams and players from international soccer tournaments—to stop the move.

It could hinge on the prospect of money up front for indebted clubs, according to Kieran Maguire, a lecturer in football finance at Liverpool University in northwest England. “Poor financial management at some European clubs has forced them to generate advanced funds to help alleviate their debt situation,” he said. “Clubs will either achieve their objective from this competition or extract further income and certainty from UEFA.”

Centricus has been in talks with UEFA for a number of months regarding financing, a person familiar with the matter said. The investment firm discussed an initial package of about 4.2 billion euros, which was increased following the Super League proposal, the person said, asking not to be identified discussing confidential information.

Negotiations are ongoing and there’s no certainty UEFA and London-based Centricus will reach an agreement, according to the people. A representative for Centricus declined to comment, while a spokesperson for UEFA didn’t immediately respond to a request for comment. UEFA will hold its annual congress on Tuesday.

In the background, though, is a plan by UEFA to expand the Champions League to 36 teams from 32 and increase the number of games. That has irked some teams complaining the season already has too many matches, while also diluting the number of games between the continent’s biggest attractions.

Under the Super League plan, the biggest clubs such as Manchester United and Real Madrid would start their own competition in August. Six teams from England, three from Italy and three from Spain have signed up so far, and they would play each other midweek as an alternative to the UEFA tournament.

In addition to what will be 15 permanent teams, another five will qualify each year for the Super League. Clubs in France and Germany, including 2020 Champions League winner Bayern Munich, are not part of it. Qatar-backed Paris Saint-German opposed the plan and sided with UEFA. PSG Chairman Nasser Al-Khelaifi said on Tuesday that “football is a game for everyone.”

Indeed, the potential advent of the rebel league has galvanized opposition to it, including from U.K. Prime Minister Boris Johnson and French President Emmanuel Macron. Prince William, who serves as president of the English Football Association, expressed his concern.

Now, more than ever, we must protect the entire football community – from the top level to the grassroots – and the values of competition and fairness at its core.

I share the concerns of fans about the proposed Super League and the damage it risks causing to the game we love. W

The tug-of-war goes to the heart of soccer’s identity in the 21st century. Leading clubs with a rich history have spent recent decades embracing global capitalism, pay-TV deals and debt-fueled foreign ownership. Local fans, meanwhile, have regularly complained of being priced out of the game they love and vented their fury at a move they see as an abandonment of soccer’s long-held traditions of open competition.

“It was a tone-deaf proposal, but the owners of those clubs won’t have been able to ignore the near universal roar of outrage from all parts of the football community over the past 24 hours,” British Culture Secretary Oliver Dowden told the U.K. Parliament on Monday.

A meeting of England’s Premier League clubs is due to go ahead on Tuesday without the six Super League entrants in attendance. Johnson will also host a round table on Tuesday with fans’ representatives and figures from the Football Association and the Premier League, a person familiar with the plans said.

While a breakaway has been mooted for years, the development has roots in a proposal—known as Project Big Picture—first put forward by the billionaire American owners of Manchester United and Liverpool last year.

The plans proposed a structuring of the governance of the English Premier League, Europe’s most lucrative national competition, to give the biggest clubs an outsized voice in its future direction. The idea was rejected by the league, but it opened up an opportunity to reshape the game. 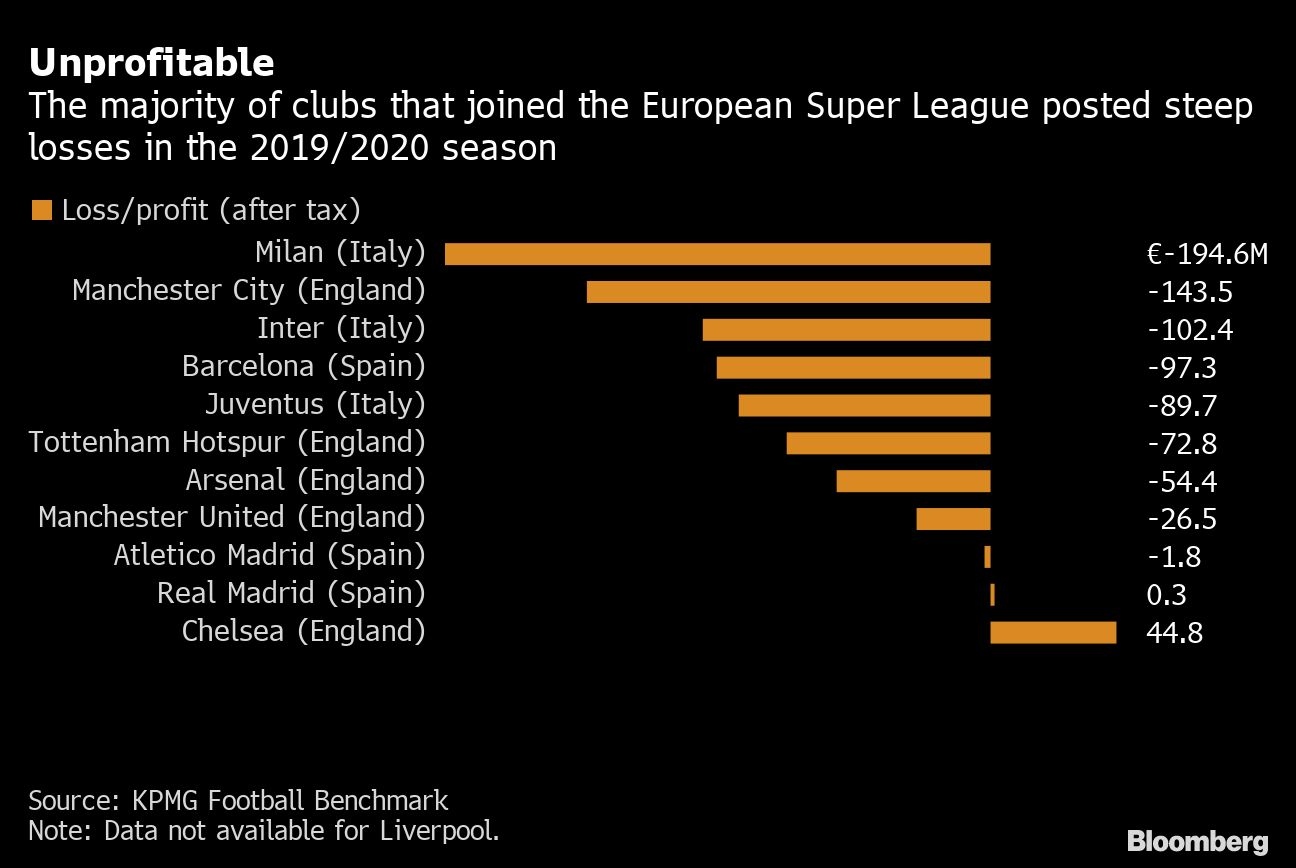 Moves to set up a breakaway European league started to strengthen as the pandemic hit soccer hard, with the prospect of cancelations first prompting broadcasters to seek rebates from clubs and governments reluctant to bail out those hit by declining matchday revenues. In total, the top 20 clubs have suffered at 2 billion-euro hit from the pandemic, according to Deloitte.

Italy’s top flight Serie A invited private equity groups to submit bids for a stake in its media rights operation, but negotiations have been fraught and there has been no deal yet. The German Bundesliga, which was first to restart games after Covid, has opened a similar auction for a stake in its overseas rights.

By the beginning of this year Bloomberg reported that the organizers were closing in on a roster of permanent members, and that JPMorgan would provide financial backing.

“COVID has provided a useful smokescreen and an opportunity for clubs to try to force through this proposal on the basis that they need to rectify financial imbalances caused by the pandemic,” said Maguire at Liverpool University.

The idea that the biggest, most successful clubs in European soccer should compete against each other underpinned the creation of the original European Cup competition back in 1955.

The tournament involved only the champions of national domestic leagues—plus the trophy holder—until the 1990s, with the list of winners including not just Real Madrid, Barcelona, AC Milan and Juventus, but smaller clubs such as Red Star Belgrade, Nottingham Forest and Dutch team Feyenoord. It was then expanded into the Champions League, effectively ensuring the big clubs remained in the competition for longer.

Proponents argue the Super League would create a more exciting competition because the game’s very top teams would play each other more often. It would also be lucrative for them, with permanent membership removing the uncertainty of qualification after a bad season.

In his first interview since the project was unveiled, Real Madrid President Florentino Perez, the first chairman of the Super League, told Spanish TV on Monday night that the plans would “save football,” saying that the clubs’ debts and revenue crunch had left them “on the edge of ruin.”

“We don’t want the rich to be richer and the poor poorer. We have to save football. Everything I do is for the good of football, which is in a critical moment.”