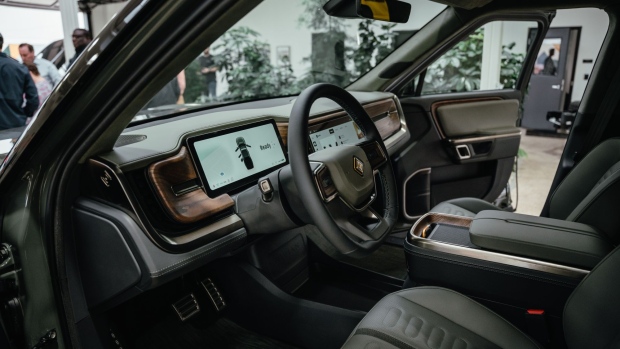 The interior of the Rivian R1T electric vehicle (EV) pickup truck at the company's manufacturing facility in Normal, Illinois, US., on Monday, April 11, 2022. Rivian Automotive Inc. produced 2,553 vehicles in the first quarter as the maker of plug-in trucks contended with a snarled supply chain and pandemic challenges. , Bloomberg

Sales in the second quarter rose to $364 million, the Irvine, California-based company said Thursday in a statement. Analysts had predicted $335.7 million on average, according to estimates compiled by Bloomberg. Rivian’s adjusted loss was slightly wider than expected.

“Our core focus remains on ramping production,” the company said in the statement. “However, we believe that supply-chain constraints will continue to be the limiting factor of our production.”

Since its blockbuster initial public offering last year, Rivian has been seen as a top contender in the pack of EV startups chasing market leader Tesla Inc. But Rivian has struggled with production at its plant in Normal, Illinois, and broader supply-chain issues. The company said recently that it would cut 6% of its workforce as changing market conditions impact its ability to raise capital.

Rivian ended the quarter with approximately $15.5 billion of cash and cash equivalents. The company also lowered its full-year capital expenditures guidance to $2 billion, down $600 million, saying it will shift some capex to next year. The company attributed the cut to a “streamlined product roadmap” and a decision to push back certain investments until 2023.

Rivian has a contract with Amazon.com Inc, one of its biggest investors, to produce 100,000 delivery vans by the end of this decade.