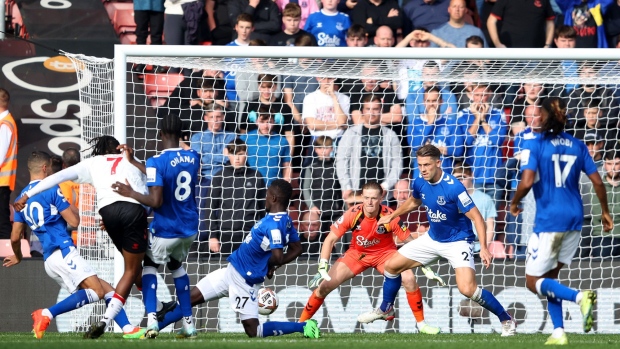 (Bloomberg) -- Everton FC is drawing takeover interest from a US special purpose acquisition company co-led by George Soros’s nephew, according to people familiar with the matter.

LAMF Global Ventures Corp. I has held preliminary talks with the English Premier League football club about a deal, the people said, asking not to be identified because the information is private.

Deliberations are ongoing and there’s no certainty they’ll result in a transaction, according to the people. LAMF could also decide to pursue a deal for another European football club, one of the people said.

A spokesman for Everton declined to comment, while a representatives for Los Angeles-based LAMF couldn’t immediately be reached for comment.

Everton stands among England’s most historic clubs and is one of just a few to have never been relegated from the EPL, the world’s richest football league. It came perilously close to losing that status last season, only to survive relegation with a game to spare.

The club is owned by businessman Farhad Moshiri. He’s invested heavily since taking a near 50% stake in 2016, with a new state-of-the-art £500 million ($566 million) stadium on the dock-side in the city of Liverpool currently in the works.

US investors in particular have been seeking deals for English football clubs, partly attracted by an appreciating dollar exchange rate against the pound. They’re also drawn in by cheaper valuations relative to sports franchises in America and the strong earnings potential from competing in the EPL.

Earlier this year, US billionaire Todd Boehly and private equity firm Clearlake Capital took over EPL heavyweight Chelsea FC in one of the biggest sports deals of all time.