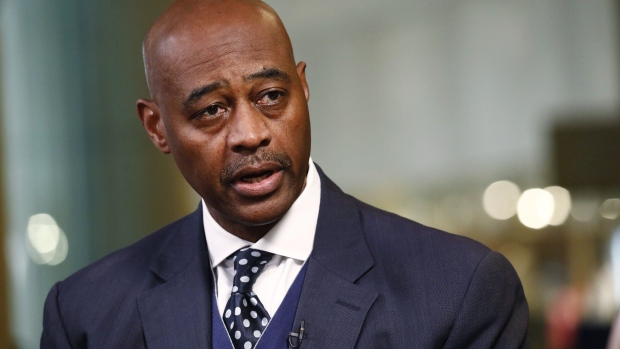 (Bloomberg) -- Ray McGuire may have left Citigroup Inc., but the bank sure hasn’t left him.

About 100 of his former colleagues have donated to McGuire, who has raised roughly $5 million since beginning his run in October, according to data supplied by his campaign. The list includes executive assistants who made $100 donations and top executives at Citigroup’s investment-banking unit who gave the maximum of $5,100.

McGuire’s mayoral bid also received financial support from a bevy of billionaires, including investors Stanley Druckenmiller and Bill Ackman, along with Leonard Lauder, the billionaire art collector and philanthropist who is an heir, with his brother, Ronald, to the Estee Lauder Cos. cosmetics fortune.

McGuire left Citigroup in October to launch his campaign, saying he wants to deliver “the greatest economic comeback” in New York history. McGuire says he hopes to invest in the city’s infrastructure, with plans to add affordable housing and upgrade bridges, roads and sewers. He plans to take advantage of low interest rates and partner with private companies for those efforts, according to his website.

Restaurateur Danny Meyer, the founder of Union Square Cafe and the Shake Shack hamburger chain, and Howard Lutnick, chairman and chief executive officer of Cantor Fitzgerald LP, are among the donors, along with ballerina Misty Copeland and actress Gwyneth Paltrow.

The list of donors who gave the maximum includes a past supporter of conservative Republicans, Ken Langone, who together with his wife Elaine donated $10,200. Langone, a founding investor in Home Depot Inc., who has occasionally backed Democrats in the past, didn’t return requests for comment. Lupe Todd-Medina, a spokeswoman for the campaign, said the Langones’ donations show that McGuire seeks and receives broad-based support.

“We think it shows Ray to be a unity candidate,” she said. “There’s a Ken Langone on there, but there are also small-business owners, and small donors who gave $250. He feels this has to be an all-out effort -- with everyone at the table -- campaign to get through this pandemic and get the city on its feet again.”

McGuire also picked up support from past rivals, with dozens of JPMorgan Chase & Co. and Bank of America Corp. employees donating to his campaign, alongside a handful from Deutsche Bank AG and Goldman Sachs Group Inc.

The campaign disclosed its donations so far following a request from Bloomberg, with its official finance report not due until Friday at midnight. The donations were reported earlier by the New York Times.