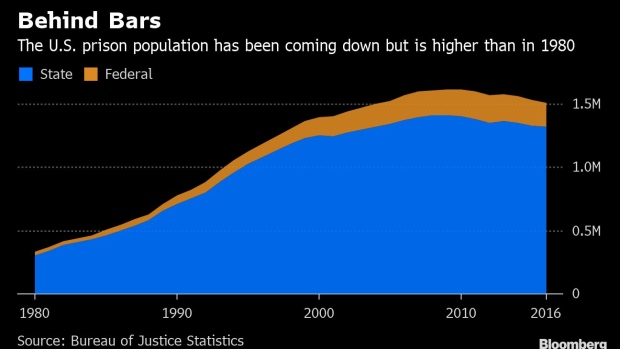 (Bloomberg) -- Fontella Hampton was recently promoted to shift leader at the MOD Pizza chain. Two years ago, simply getting and holding down a job was a daunting prospect. Hampton, 53, was behind bars in the Logan Correctional Center near Springfield, Illinois, after being convicted of domestic battery. She’d previously served time for drug possession.

Not exactly the life history employers look for. But Hampton applied to MOD through 70 Million Jobs, a for-profit job board for people with criminal records, and was hired about 10 months ago at one of the fast-casual chain’s Chicago-area restaurants. Now she’s supporting three of her grandchildren, buying a house and celebrating a fresh start.

“It’s the reason I get up out of bed in the morning because I was only getting up to go and do drugs,” she says. “Once I got the job under my belt, I just had to find myself and get the confidence that I could do these things.”

Struggling to fill openings amid the tightest labor market in half a century, U.S. restaurant chains as varied as McDonald’s Corp., MOD and Firehouse Subs are overlooking the stigma that clings to ex-offenders like Hampton. Besides keeping their workforces topped up, the companies are reaping a public-relations benefit by helping reintegrate parolees into society.

Hiring managers acknowledge that some customers may balk if they discover the person serving them served time. But in many cases, they say, former prisoners are model employees because they appreciate the second chance.

“Even though they made some bad choices, they’re not bad people,” says Ron Smith, who runs 13 McDonald’s franchises in the Las Vegas area and has been hiring cashiers and fry cooks from juvenile detention halls. “They have seen the opportunity in front of them.”

Smith is finding them through Toe Tag Monologues, a youth theater group started by a retired police officer that weaves school violence, drug abuse and other life-and-death situations into performance art. He isn’t planning to hire adult ex-convicts right now but hopes to share his youth program with other McDonald’s operators around the country.

Firehouse Subs is heading to a hiring event for ex-offenders next month in Jacksonville, Florida. Last year, amid the labor crunch, the 1,170-store chain signed a three-year agreement with the Florida Department of Corrections to consider convicted felons for all vacant positions including cashiers, delivery drivers and managers. “It’s still a very tough environment” to hire, CEO Don Fox says. “It goes back to the unemployment rate being so low.”

America has the largest prison population in the world, in large part the result of get-tough-on-crime legislation in the 1990s that has come to be seen as an over-reaction. A bipartisan bill reintroduced this year would offer $20 billion to states that decrease their prison populations while also keeping crime rates low.

Incarceration rates have already been falling in recent years. Yet 2.16 million people remained behind bars, and another 4.54 million were on probation or parole at the end of 2016. That’s roughly one in 38 adults, according to the Bureau of Justice Statistics. The unemployment rate among parolees, an estimated 27%, is more than seven times higher than it is for the general population.

When labor markets are tight, companies tend to loosen their hiring restrictions. In the late 1990s, companies actively recruited so-called welfare moms after the U.S. began requiring people to work in exchange for government assistance. Many employers had good results with these hires, who gained experience and were more likely to keep their jobs when the economy soured.

Harry Holzer, a public policy professor at Georgetown University, says now’s the time to put ex-cons to work. “These are the best possible circumstances,” says Holzer, who was formerly chief economist at the Department of Labor. “We outta really be trying very hard as a society to place these guys.”

Restaurants have struggled to find enough workers for several years. Besides operating in a tight labor market, they’re also competing for talent with gig economy employers like Uber Technologies Inc. Chains are turning to non-profit and for-profit groups set up to help ex-offenders find work.

These organizations do a lot of the grunt work, helping reconnect families, manage substance abuse and even build resumes. 70 Million Jobs says it looks for people who’ve been out of prison for a while and have stayed out of trouble. Typically, low-level drug dealers get a pass; those who’ve committed murder, rape or sex crimes don’t.

Defy of Northern California helps former inmates with interview prep, including reminders to make eye contact, enunciate words and shake hands firmly. The non-profit also has a course on dining etiquette—in case they need to attend a lunch meeting—and helps with soft skills, such as thinking like a customer.

Lucas Rose, another MOD employee with a record, says he was homeless and addicted to drugs before finding work. The 22-year-old had served time in jail after failing to show up for court dates.  But he’s in recovery now, has an apartment and attends narcotics anonymous meetings with co-workers. Soon, he’ll be a MOD assistant manager overseeing 35 people.

MOD is a “second-chance company,” Rose says. “They don’t judge people based on their past and where they’re coming from.”

The chain says that because former felons tend to stick around, hiring them makes financial sense. The pizza purveyor’s first employee with a criminal record started in 2010. Kory Harp, 38, still works at MOD and was just promoted for the fifth time—now, he’s at the company’s headquarters in Bellevue, Washington. At his first interview, Harp was wearing a monitoring bracelet.

To contact the author of this story: Leslie Patton in Chicago at lpatton5@bloomberg.net

To contact the editor responsible for this story: Robin Ajello at rajello@bloomberg.net, Lisa Wolfson