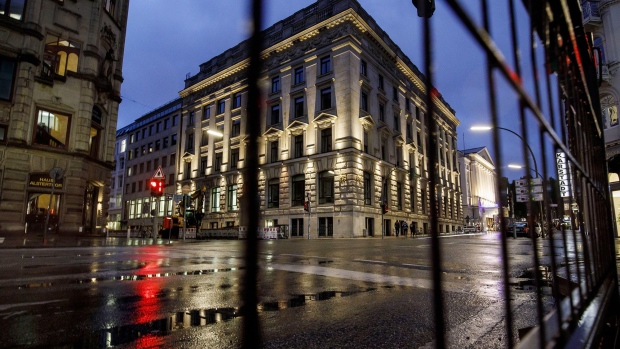 HAMBURG, GERMANY - SEPTEMBER 03: M.M. Warburg and Co. bank building stands at twilight on September 3, 2020 in Hamburg, Germany. New reporting by German weekly Die Zeit and public broadcaster NDR suggests federal Finance Minister and current chancellor candidate for the German Social Democrats (SPD) Olaf Scholz may have had a stronger involvement with Warburg during the bank's cum-ex financial scandal than previously known. Warburg was among a number of German banks that used the cum-ex scheme to claim tax reimbursements from the state for taxes they had had never paid. Warburg was ordered to pay tens of millions of Euros as a result, though city authorities failed to follow through on getting Warburg to pay up. According to the media outlets Scholz, who was mayor of Hamburg at the time, met with Warburg co-owner Christian Olearius more times than Scholz has previously disclosed. (Photo by Morris MacMatzen/Getty Images) , Photographer: Morris MacMatzen/Getty Images Europe

(Bloomberg) -- An ex-senior manager at M.M. Warburg & Co. is next in line to face trial in Germany over the Cum-Ex scandal -- three months after another former executive of the bank was sentenced to 5 1/2 years in prison.

Detlef M., former managing director of Warburg Invest, the lender’s investment arm, appeared in a Bonn court on Thursday accused of participating in a scheme that lost the country 157 million euros ($184 million). The 63-year-old is in the same courtroom where his ex-colleague Christian S. was convicted and sentenced on June 1.

In Cum-Ex deals, investors used short sales to earn duplicate tax refunds on dividend payments on German shares. The practice ended in Germany in 2012 when the nation revised its rules, but the schemes may have cost taxpayers more than 10 billion euros. Germany’s top criminal in a landmark case in July said that the deals were illegal and criminal, calling them a “blatant money grab.”

Detlef M. was a central player when Warburg Invest set up two funds to conduct Cum-Ex trades, prosecutor Axel Koertgen said when reading the indictment. One of them, BC German Equity Special Fund, traded in April and May 2009. In 2010, the strategy was replicated with the BC German Hedge Fund. The units, which were tax exempt under German law, made false statements to the authorities when claiming refunds, according to the indictment.

Detlef M. also disguised the trading strategy in paperwork while setting up the funds, said Koertgen. He made statements “veiling” the investment strategy by talking about “pricing anomalies” while the only sources of profit were illicit tax refunds, the prosecutor told the court.

Detlef M. and his four lawyers will have the opportunity to comment on the allegations later on Thursday in court. Ingo Heul, one of his lawyers, earlier this month has called the charges unfounded.

Warburg, which dates back to 1798, has repeatedly said it never intended to participate in illegal transactions, mislead authorities or seek unjustified tax refunds.

Detlef M. is one of four ex-bankers of the Hamburg-based lender who were jointly charged last year over a total tax amount of 325 million euros. Because of the pandemic, they are now being tried individually to allow social distancing while the cases are heard. Christian S. was tried first and has appealed his June conviction.

In the written version of the June 1 judgment targeting Christian S., the Bonn judges cite multiple emails by Detlef M. that discuss the deals including a 2009 effort by Germany’s Federal Finance Ministry to clamp down on potential misuse of tax rules via short-selling transactions. Detlef M. is mentioned more than 30 times in that document.