Imperial Oil to write off up to $1.2B in Alberta natural gas assets

Exxon Mobil Corp. is about to incur the biggest writedown in its modern history as the giant U.S. oil and gas producer reels from this year’s collapse in energy prices.

Exxon -- traditionally far more reluctant to cut the book value of its business than other oil majors -- on Monday disclosed it will write down North and South American natural gas fields by US$17 billion to US$20 billion. That could make it the industry’s steepest impairment since BP Plc’s 2010 Gulf of Mexico oil spill that killed 11 workers and fouled the sea for months. Meanwhile, capital spending will be drastically reduced through 2025.

The announcement comes in the waning days of a grueling year for Chief Executive Officer Darren Woods, who’s resorted to laying off thousands of employees, curtailing retirement benefits and canceling ambitious growth projects. The former refinery manager, who stepped in to the top job in 2017, has been forced to recast his seven-year, US$210 billion blueprint for rejuvenating Exxon’s aging portfolio of crude and gas holdings.

In addition to dropping vast swaths of gas assets from the development queue, Woods is capping capital spending at US$25 billion a year through 2025, a US$10 billion reduction from his pre-pandemic target. Exxon shares rose 2.4 per cent to US$39.05 at 10:01 a.m. in New York, trimming the year-to-date decline to 44 per cent. 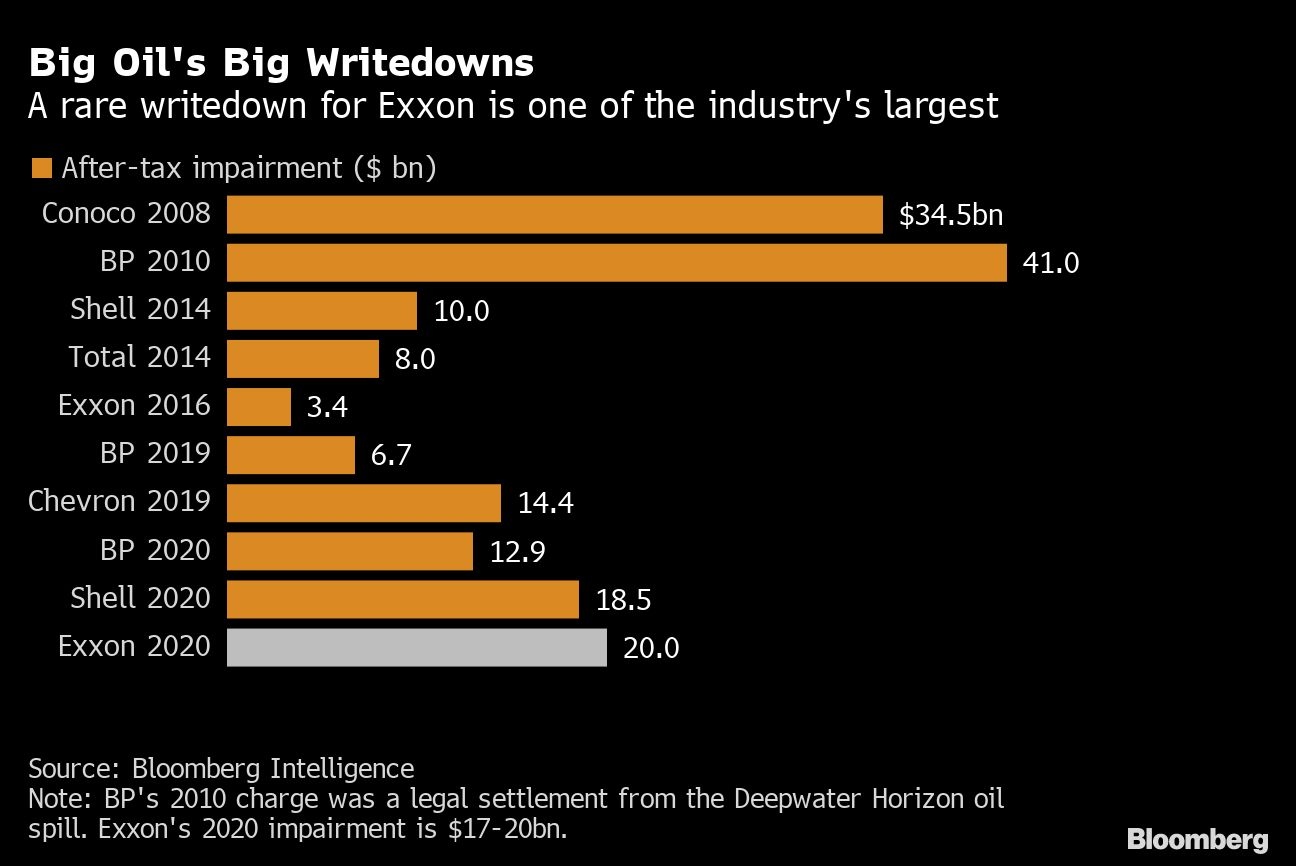 This year has been particularly bruising for America’s most-iconic oil explorer. Exxon lost money for three consecutive quarters, an unprecedented streak, the shares dipped to an 18-year low and the company was ejected from the bosom of blue-chip stocks, the Dow Jones Industrial Average. Woods also plans to cut 15 per cent of the company’s workforce by the end of next year.

From being the largest company in the S&P 500 Index as recently as 2012, Exxon now ranks just inside the top 50 as energy lost its luster and technology giants grew. Chevron Corp. now has a larger market valuation than Exxon.

Unlike its European peers, Exxon has so far chosen to stick with its US$15 billion-a-year dividend and has increased borrowing in recent months to fund it and its other capital priorities. On an annualized basis, the dividend has been increased each year for almost four decades.

Optimism that vaccines will soon restore global economic growth buoyed crude prices in recent weeks but the impact of the contagion on Big Oil is likely to be longlasting. With European giants Royal Dutch Shell Plc and BP accelerating the pivot to renewables and Exxon locking in drastic spending cuts, capital flows into big, traditional developments are expected to shrink in coming years.

Cowen & Co. analyst Jason Gabelman detected a subtle shift in Exxon’s word choices that may herald a dramatic change in financial priorities. Whereas company executives touted Exxon’s “reliable and growing dividend” during the third-quarter earnings conference call, Monday’s statement only mentioned reliability, the analyst said in a note to clients.

“Continued emphasis on high-grading the asset base -- through exploration, divestment and prioritization of advantaged development opportunities -- will improve earnings power and cash generation, and rebuild balance sheet capacity,” Woods said in the statement.

Exxon has been warning shareholders since October that its gas assets were at risk of significant impairment. Previously, the energy titan’s largest writedown was for about US$3.4 billion in 2016, according to Bloomberg Intelligence.

Assets removed from Exxon’s development plans include so-called dry gas resources in Appalachia and the Rocky Mountains, Oklahoma, Texas, Louisiana and Arkansas, as well as western Canada and Argentina, the company said. It will attempt to sell “less strategic” assets.

The writedown stems from former CEO Rex Tillerson’s decision a decade ago to buy XTO Energy for US$35 billion rather than spend years building an in-house shale business. At the time, the outlook for North American gas prices was bright because demand was rising faster than supply.

Instead, fracking was a victim of its own success, unleashing so much gas that it overwhelmed demand and the infrastructure needed to handle it, resulting in a prolonged stretch of depressed prices.

U.S. rival Chevron recorded an impairment of more than US$5 billion on Appalachian gas a year ago, and recently agreed to sell those fields to EQT Corp. for about US$735 million.