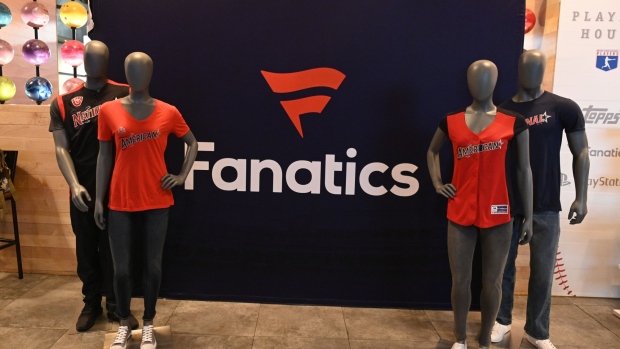 (Bloomberg) -- Fanatics Inc. has raised funds at a $31 billion valuation, according to a person familiar with the matter, giving the sports apparel and collectibles company new ammunition as it expands into additional business lines.

The roughly $700 million round was led by private equity firm Clearlake Capital Group and joined by LionTree, with existing investors including Silver Lake Management, SoftBank Group Corp. and Fidelity Management & Research also taking part, said the person, who asked not to be named discussing private information.

Fantatics was previously valued in March at $27 billion, as Chief Executive Officer Michael Rubin pushes into new businesses beyond the company’s origins in sports merchandise. It expects to have about $8 billion in annual revenue next year, the person said.

Executives have said they will soon enter the sports-betting sector and have considered other industries as well, such as media and ticketing. Fanatics has already made a heavy push into sports collectibles by scooping up rights to sports leagues and acquiring cardmaker Topps for about $500 million in January.

The Jacksonville, Florida-based company has also bolstered its core merchandise business, which still makes up the majority of revenue. In February, it joined with a group of celebrity investors to buy fellow sports-apparel seller Mitchell & Ness, best known for its throwback jerseys.

The Wall Street Journal reported earlier on the funding.