Remember the FANG trade? It’s back, thanks to a rally that’s excluded Apple Inc.

A slump in the shares of the iPhone maker that erased US$380 billion in market value has helped revive interest in the original gang of Facebook Inc. (FB.O), Amazon.com Inc. (AMZN,O), Netflix Inc. (NFLX.O) and Google parent Alphabet Inc. (GOOGL.O), which have gained anywhere from 10.7 per cent to 50 per cent since Christmas Eve. All except Google have outperformed the S&P 500’s 11.3 per cent advance. Apple has lagged behind, with a gain of just 5.5 per cent over the period.

Apple’s rise to become the world’s most valuable company all but necessitated its inclusion in the group of stocks revered for their rapid growth, so before long the FANG acronym was often being replaced by “FAANG.” Now, with the Cupertino, California-based company languishing 33 per cent below an October record, investor focus is shifting. 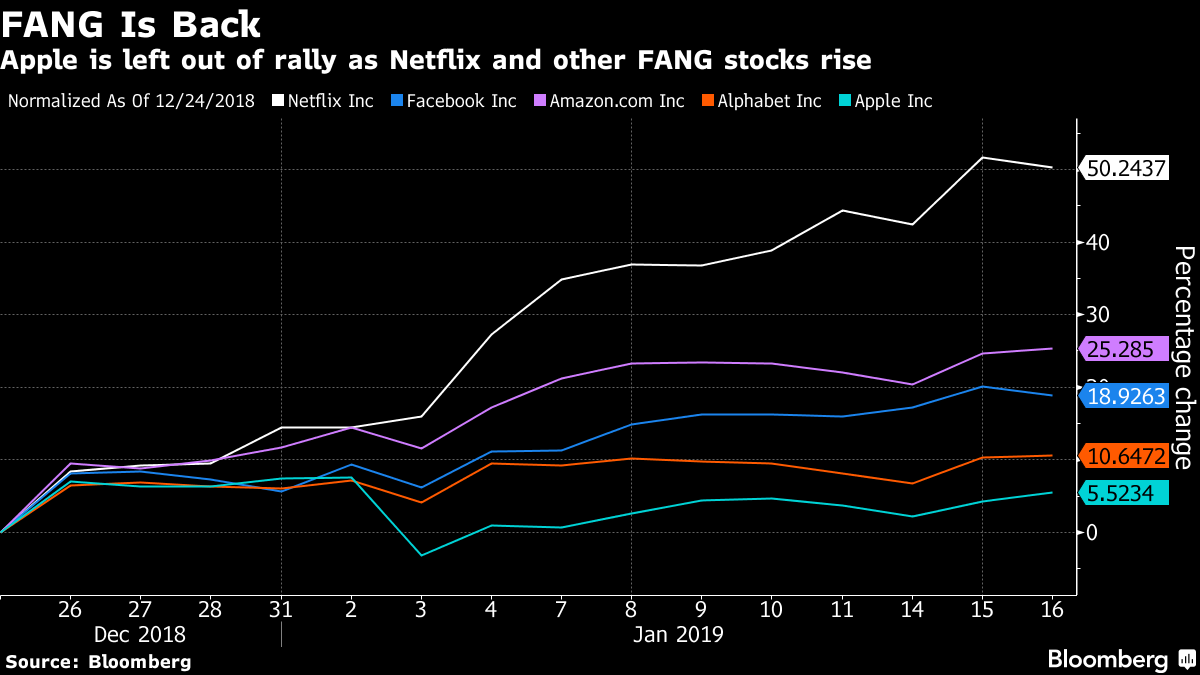 On Tuesday, Citigroup noted that the firm has buy ratings on all four FANG stocks for the first time in six years. On the same day Canaccord Genuity highlighted a strong outlook for the group.

Netflix, one of the best-performing large-cap tech stocks in 2018, has gained 50 per cent since Dec. 24. Hits like the Sandra Bullock film Bird Box have helped fuel rising expectations for subscriber additions, which will be revealed on Thursday when the company reports fourth-quarter earnings. Amazon has rallied 25 per cent in that period, Facebook 19 per cent.

Netflix’s gains are an "indicator that investors are likely to return to these stocks quickly if underlying fundamentals are solid," Canaccord analyst Michael Graham said.