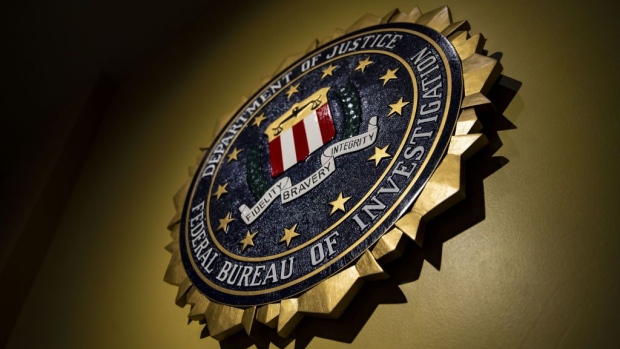 The seal of the Federal Bureau of Investigation (FBI) hangs on a wall before a news conference at the FBI headquarters in Washington, D.C., U.S., on Thursday, June 14, 2018. Former FBI Director James Comey was "insubordinate" in handling the probe into Hillary Clinton, damaging the bureau and the Justice Department's image of impartiality even though he wasn't motivated by politics, the department's watchdog said today. Photographer: Al Drago/Bloomberg , Bloomberg

“We haven’t seen cyber attacks to date this year on voter registration databases or on any systems involved” in voting, Wray told a cybersecurity conference. “And to our knowledge, no foreign government has attempted to tamper with U.S. vote counts.”

However, Wray said the FBI provided Twitter Inc. and Facebook Inc. with information to take down social media accounts associated with a Russian influence campaign that tried to hire unwitting U.S.-based journalists and use political ads.

“Twitter and Facebook did so before those accounts could develop anything more than a nascent following based on information from our foreign influence task force,” Wray said.

President Donald Trump, Attorney General William Barr and others and others say that the approaching U.S. presidential election might be manipulated, whether by fraudulent ballots domestically or interference by foreign adversaries.

Wray is also expected to testify about election security on Thursday at a House Homeland Security Committee hearing. He’s likely to be asked to comment further on the security of voting infrastructure and on interference operations by Russia, China and others.

With regard to Russia, Wray said the Federal Bureau of Investigation and the National Security Agency recently “uncovered and exposed highly sophisticated malware developed by Russian military intelligence.”

“That information allowed us to release an unclassified report to warn the right people,” Wray said. “That public release was a painful disruption to a well-known adversary. It imposed a real cost on Russia because they spent a lot of time and money developing the malware we outed.”

“We’re giving those companies the information they need to protect themselves,” he said, describing a new FBI strategy to work more closely with businesses and government agencies in the U.S. and abroad.