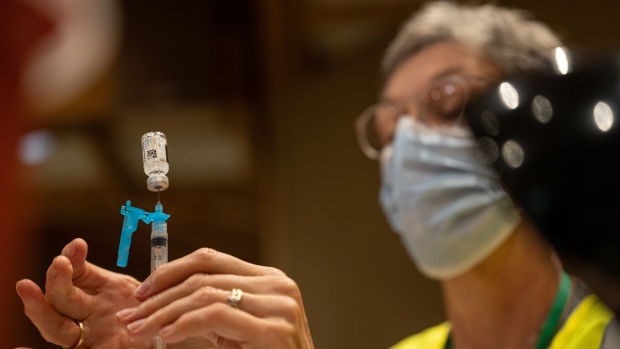 A healthcare worker fills a syringe with a dose of the Johnson & Johnson Covid-19 vaccine at a vaccination popup location inside the Louisville Zoo in Louisville, Kentucky, U.S., on Friday, Aug. 6, 2021. Vaccination rates across Kentucky’s 120 counties vary from as low as 21 percent to as high as 61 percent, according to data from the Centers for Disease Control and Prevention. , Bloomberg

(Bloomberg) -- U.S. regulators didn’t make a recommendation on whether recipients of the Johnson & Johnson Covid-19 vaccine should receive a booster, ahead of a closely watched meeting where scientific experts will weigh whether study data supports giving the additional dose.

On Friday, the Food and Drug Administration’s advisers will convene to guide the agency on J&J’s request for an emergency-use authorization of a second shot. In a 54-page report released Wednesday in preparation, the agency’s staff didn’t make a formal recommendation for the panel.

On Friday, the FDA’s advisers will discuss potential time intervals for the booster to be given. While J&J has recommended a booster at six months or more after the initial shot, it said it may also be administered as early as two months, based on the strength of the immune response.

J&J’s two-dose results are somewhat complicated because it originally studied the vaccine as a single-dose inoculation. It then conducted a large trial examining the efficacy of two doses given two months apart.

Separately, the company ran a much smaller trial looking at whether giving a second shot six months after the first raised neutralizing antibodies. Both these trials are part of the company’s booster shot submission.

Giving two doses of its vaccine two months apart was 94% effective in preventing moderate symptomatic cases of Covid-19 in the U.S., J&J has said. That’s similar to the efficacy rate seen in original final-stage trials of the two-dose messenger RNA vaccines from Moderna and the Pfizer-BioNTech team.

In their report, the FDA staffers said that they had not been able to independently confirm J&J’s findings on the impact of the the two-month interval between the initial shot and the booster. The staff also noted that the margin of error between one- and two-dose efficacy rates overlapped.

J&J hasn’t reported how a booster delivered six months following the initial dose impacts efficacy against Covid, although it has said a booster at that interval led to a rapid and strong increase in antibodies.

U.S. regulators added in their Wednesday report that some data showed that a longer interval between the initial dose and the booster may result in a stronger response in protective neutralizing antibodies.

In particular, the staff said, there were too few cases of the delta variant in the the two-month interval trial to make any conclusions about efficacy against the strain. However, the two-shot trial results didn’t identify any new safety concerns, the agency said.

The single-shot vaccine continues to afford protection against severe Covid-19 disease and death in the U.S., the FDA staff report said. And it was still less effective than messenger RNA shots developed from Moderna and the Pfizer-BioNTech team, the staff said.

(Updates throughout with details from agency report)