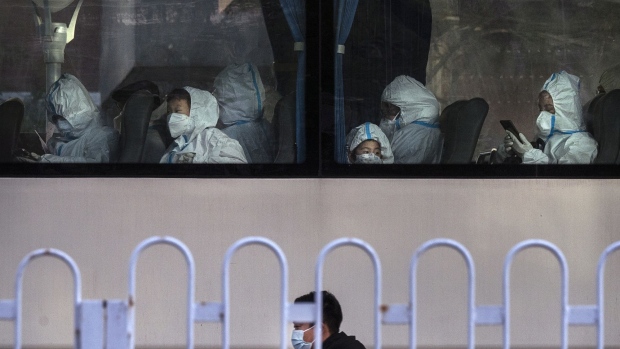 Passengers, including children, wear protective clothing inside a bus in Beijing on Nov. 15. , Getty Images via Bloomberg

(Bloomberg) -- On Monday, a rumor took hold that Shijiazhuang, a city 160 miles from Beijing, was to become a test case for China’s reopening, dismantling key parts of the Covid Zero regime.

But rather than jubilation that the policy’s incessant testing and disruptive lockdowns would be over, the speculation was met with fear by many in the city of 11 million. Parents kept their children home from school, shoppers stocked up on traditional Chinese medicine and people on the subway were few and far between.

The reaction highlights one of the key roadblocks to China joining the rest of the world in living with Covid: paralyzing fear of the virus. For the past three years, the government told its people that Covid-19 was so dangerous that the world’s most-populous country needed to be closed off to combat it.

Adjustment will require more than just a clear rhetoric shift.

“Without the testing, I wouldn’t be able to find out who is positive,” said Linda, a middle-aged manager with a state-run financial institution who asked to withhold her last name so she could speak freely. “I would be scared,” she said. “There will be no sense of security.”

It’s not only concern for her own safety. Linda said she would also feel guilty if she contracted Covid and unwittingly passed it on to those around her. And that risk is real. A study from Shanghai’s Fudan University released earlier this year found China risked a “tsunami” of Covid if the policy was halted, leading to as many as 1.6 million deaths.

The torrent of worry on social media triggered a response from local government officials, who denied the rumors and said the city wasn’t “lying flat,” a pejorative term that means essentially doing nothing. Shijiazhuang was making its Covid controls more targeted and scientific to coincide with the central government’s approach, said Zhang Chaochao, the city’s Communist Party chief.

Days earlier, Beijing released a list of 20 measures to refine its Covid policy, laying out changes that many interpreted as a relaxation of its rules. Others speculated that the country wouldn’t let down its guard all at once, instead picking precise places to road test any significant changes.

Linda wasn’t alone in her fear. Many Chinese residents are resistant to the idea of easing the strict zero-tolerance policy, which has kept the country largely virus-free since the original outbreak occurred in Wuhan. It reported just under 20,000 new local infections across the country of 1.4 billion people on Wednesday.

It was in that environment that residents of Shijiazhuang started to panic as the city closed test centers, reopened schools and allowed people to enter public venues without a negative test, even as its case counts continued to climb past 300 a day.

While public transportation wasn’t interrupted, few people used it. Instead, they bought traditional Chinese medicine thought to ward off Covid or sooth its symptoms.

“My relatives were all purchasing tons of Lianhua Qingwen capsules because they were just confused about what will happen and are afraid of getting infected,” said Henry, a 26-year-old Shijiazhuang resident. One of his family members asked to keep their child home from primary school for fear they would contract Covid there, he said.

Similar caution was playing out in other places. In southwestern Chongqing, China’s most populous city with 32 million inhabitants, public transportation use collapsed even though there were no citywide mass lockdowns. While there would normally be 2.75 million subway rides taken on an average day, there were only 61,000 on Tuesday, according to data compiled by Bloomberg.

Residents were asked not to leave the city unless their departure was essential, as case counts approached 3,000 on Tuesday.

The trepidation seen in China isn’t unusual for a country that still hasn’t had one of the massive nationwide outbreaks that hit everywhere else in the world. While running the gauntlet of Covid exposure for the first time is terrifying, it does reveal that the vast majority of people survive unscathed and leaves widespread immunity in its wake.

Some people already have a broader take on the risks.

“In my view, Covid isn’t as serious as it was in Wuhan, where the fatality rate was quite high and scary,” said Wei Wei, a saleswoman in Shijiazhuang. “Most people are asymptomatic, and they turn negative after staying at home for three to five days.”

She still was cautious in some respects, especially for children.

The rumors that Shijiazhuang, which had removed test sites across the city, might be the first to exist Covid Zero were went viral on social media. Posts about its response accounted for three of the top 11 trending topics on Weibo earlier in the week, including the No. 1 item that discussed its Covid control measures.

Experts reacted with dismay to the idea that such a major shift could occur with so little notice.

“If they are really giving up on Covid Zero, they need to make preparations in advance, including educating the population, or people will just freak out, said Huang Yanzhong, a senior fellow for global health at the New York-based Council on Foreign Relations.

The policy should end eventually, but it should come at a measured pace while boosting vaccinations and stockpiling drugs and medical equipment, according to Linda, the manager from the state-run financial institution.

“You can only do it slowly,” she said. “You can not reopen like lifting the floodgate.”

--With assistance from Li Liu, Allen Wan and James Mayger.