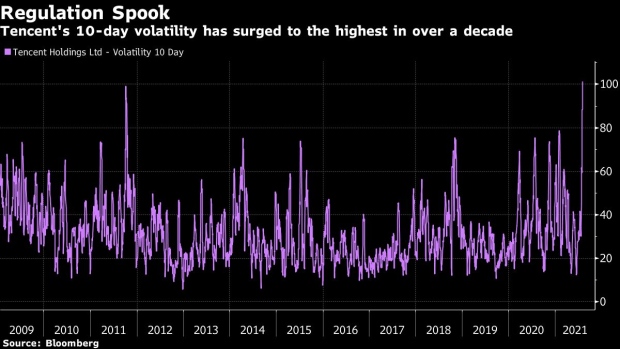 (Bloomberg) -- The plunge in Hong Kong-listed Chinese tech stocks Tuesday underscores the market’s vulnerability to Beijing’s displeasure with the nation’s internet giants -- and just how hard it is for investors to pick the bottom.

After five months of declines that took the Hang Seng Tech Index down nearly 40% from its peak, analysts had been on the lookout for a rebound.

What they got instead was a scathing critique of the online gaming industry in the state media and a 6.1% drop in Tencent Holdings Ltd., which was Asia’s largest stock by market value. The broadside came after the government’s ban late last month of profits at tutoring companies triggered a near $1 trillion global selloff.

“The market is on razor’s edge and is extremely jumpy, especially after last week,” said Chen Yicong, managing director at Beijing Chengyang Asset Management Ltd. While Chen suggested the industry should be able to make “technical adjustments” to satisfy the government’s concerns, the mood in the market is again pessimistic.

Jeffrey Halley, senior market analyst at Oanda Asia Pacific Pte., said the “biggest conclusion we can draw is we are not at peak China regulatory risk.”

Tencent shares have fallen 42% from a January high as authorities moved to curb anti-monopoly practices among tech giants. Rivals NetEase Inc. and XD Inc. also tumbled on Tuesday, each down around 8% as investors took fright at the state-owned Economic Information Daily’s description of games as “spiritual opium” and “electronic drugs.” The link to the article was removed later in the day.

“Investors are trying to price in regulatory risks as well as cheap valuations after deep falls,” said Margaret Yang, a strategist at DailyFX. “Tencent falling 11% after an article on gaming shows investors very sensitive even as they look for bargain hunting opportunities.”

The Hang Seng Index slid 0.2% while Hong Kong’s tech-stocks gauge lost 1.5%. The HSI Volatility Index, which measures the 30-day expected volatility of the benchmark HSI, jumped 26% last week, the most since October 2020. The volatility gauge has since fallen but remains at multi-month highs.

Despite the market carnage, the broader Chinese market has some heavyweight advocates, including billionaire investor Ray Dalio. In an article published on Friday, the founder of Bridgewater Associates defended China’s tough regulatory approach and said Beijing is addressing issues that will help the country as a whole.

Volatile stocks that have over-corrected may lead a rebound, analysts including Wang Hanfeng at China International Capital Corp. wrote in a note Monday. CICC is recommending shares of companies linked to economic growth that are delivering good earnings and face limited policy risks. It also likes those in technology hardware, electric vehicles, healthcare and consumer goods.

Beijing’s regulatory clampdown on anti-monopolistic practices and data security has marred the business prospects of China’s tech behemoths to the extent that Morgan Stanley now expects the internet sector’s weighting to be reduced in the MSCI China Index over time.